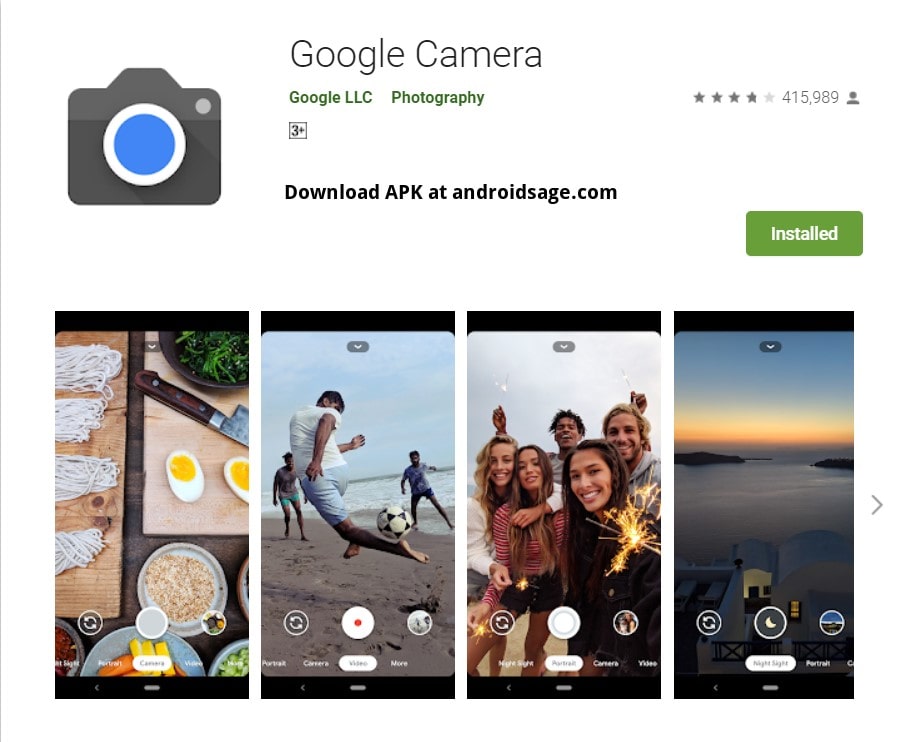 Other changes pertain to the user interface. The settings UI for the camera mode and the portrait mode get a minor rearrangement. The flash option now rests at the top making it the first option. Followed by options like RAW, motion, timer, ratio, and so on. In the previous Google Camera 7 or earlier, we say a completely revamped user interface. Especially with the Night Sight making its way to the front of the user interface, getting rid of the the top settings bar completely and replacing it with a drag down layout as we see now, Astrophotography mode, etc. The APK insight of the Google Camera 7.3 also revealed a surprising new feature of 24 fps video recording. This is unusual because users complain about the lack of 60 fps support with higher resolutions on the Pixel 3 and Pixel 4.

Following we have the very first modded Gcam 7.3 APK available for download that should work with most of the Android devices out there. Now, we already posted about the Google Camera 7.3 just a couple of day ago. However, that was the original non-tampered version. Here we have the modded Google Camera 7.3, more commonly known as Gcam 7.3, that should install and run on most of the Android smartphones. So download and install the latest Gcam 7.3 APK from below.

Updated: New Google Camera 7.3.021 and Google Camera v7.3.0.18 HotFix APK is now available for download. So look for a newer version of Gcam 7.3.0.20/21 APK from various Gcam developers like parrot, Arnova, and more. You can also the the stunning Google Camera Go from below. Also, download Pixel 4a camera APK.

Here is the first ever Google Camera 7.3 modded APK available for download. Thanks to the developer like Parrot043 for the amazing port. According to developer, the first version is a beta version of the latest Gcam version. It has all the features from the previous versions and the new bug fixes as well; except for the disabling of Google Photos.

The popular Gcam developer Arnova8G2 has stepped in and released a stunning Google Camera 7.3 APK . Arnova’s Gcam 7.3 app is the first build and is still in beta. However, it has been tested working on most of the smartphones devices with latest Android 10 firmware update. This includes the OnePlus 7, 7 Pro, OnePlus 7T, 7T Pro, OnePlus 6/6T, Essential Phone, Poco F1, and more. You can also test it on various Samsung devices including Galaxy S10 series, Note 10/10+, Galaxy S9 series, Note 9, and more. Thanks to the developer Arnova8G2, we now have the modded Gcam 7.3 for all Android devices.

Urnyx05 is another very popular Gcam developer. The developer’s work is liked by all especially the OnePlus community. You can try the latest Gcam 7.3 build by Urnyx05 on any OnePlus smartphones including the OnePlus 6, 6T, OnePlus 7, 7 Pro, 7T, and 7T Pro running latest Oxygen OS 10.3.1+ based on Android 10. You can also try the older versions on OnePlus 5 and 5T as well.But Snapdragon 855, 855 Plus, and 865 are good to go.

The following APK comes from the popular Gcam developer wyroczen. This Gcam 7.3 should work on the new Xiaomi devices like the Redmi 8. Note 8, and more. You can also try it on other phones running Android 10 and 9 Pie.

The developer San1ty is a one of a kind Gcam developer. San1ty primarily makes Google Camera builds for the Xiaomi Poco series. The latest Gcam 7.3 by san1ty works perfectly with the Poxo X2 and Poco F1. APK download below.

Marlin-ku supports Xiaomi and Nokia devices. The most recent Gcam 7.3 supports most of the Xiaomi phones including Mi 8, Mi Mix 2, etc. Also, Nokia 8.1.

jairo_rossi Gcam 7.3 builds are based on Arnova’s latest 7.3 modded APK. The developer just added support for Samsung Galaxy smartphones. The supported list of phones include Xiaomi Poco F1 or Pocophone F1, Mi8/Lite, Mi9/T/Pro, Mi A3, Mix 2S, Samsung Galaxy S9. You can test it on more Samsung devices as well.

Google Camera 7.3 by marco for OnePlus

tigr’s latest Gcam 7.3 builds are meant for Xiaomi Redmi devices. These builds work perfectly with the Redmi Xiaomi Redmi Note 5, Note 7, X, Note 8T. For rest of the OnePlus devices, check the above builds by developers like Arnova, parrort, BSG and more.

Google Camera 7.3 by the dice

The latest Gcam 7.3 builds by the dice should work on Android One devices. It should work on mid range Snapdragon chipsets like 600 series or 700 series.

Pitbull’s Gcam 7.3 mods should work on most of the Android devices running Android 10 or 9 Pie.

What is HyperCam? A GCam port but more materialized for any phone with the Camer2API so we don’t have to get a phone specific port. However, you still need to use profiles or config files. Here is the latest HyperCam APK download based on Gcam 7.3+.

Following you will see the most stable versions of Google Camera 7.2 mods compiled by a variety of Gcam developers. The downloads range from the current Android 10 firmware like the OnePlus’ Oxygen OS 10 for the OnePlus 7 series and OnePlus 6 series, Samsung’s OneUI 2.0 for the Galaxy S10 series, Note 10 series, Galaxy S9 series, Note 9, or Xiaomi’s MIUI 11 for the Poco F1, Redmi K20 series, or Nokia 7 Plus, 8 series, Nokia 6 series – all the way back to Android 9 Pie, 8.0 Oreo, or earlier.