Google introduced Android Go last year with Android 10 and the firmware continues to Android 11 this year. Android Go Edition phones are inexpensive and hence feature very low end processors. So much so that Google developed an entirely new OS for the sub $100 phones called the Android Go Edition; or so called the lite version of Android. For instance, the Nokia 1.3 device is a €95 phone that runs of Android Go OS featuring Snapdragon 250 SoC. While the device has an upgrade plan for Android 11 Go and even the Android 12 Go Editions, the most intriguing part about this low-end smartphone is the Google Camera Go APK.

We already have the stunning Google Camera APK and Gcam 7.3 ports from various developers for many Android devices out there. However, the Google Camera app only support flagships phones or high end processors similar to Pixel phones. This creates a problem for the budget Android devices and even the mid-range smartphones. While the original Google Camera does not run of non-Pixel devices, there is a large community of developers behind the unofficial Gcam ports. But due to the limitation of Camera2 API, Gcam ports will only run on high end smartphones with processors like Qualcomm Snapdragon 865, 855, 845, and so on; and in some cases even the Snapdragon 700 series and 600 series.

So as for the low-end and even the mid-range Android devices, the Gcam ports mostly won’t work let along the Google Camera APK. This can be solved with the Android Go’s Google Camera Go APK. The Camera Go app comes pre-installed on Nokia 1.3. It features a fair amount of functionalities and settings as compared to the stock Pixel 4 camera app. The Google Camera Go APK interface is minimalistic with 4 options including camera (for photos), video, portrait, and translate. The settings is also a small overlay dialogue box with toggles for flash, timer, and face enhancer.

However, it still lacks some crucial features like Night Sight and hence, the Astrophotography mode. Regardless, the Google Camera Go is worth a shot. Most importantly, it doesn’t require the Camera 2 API present in the Google Camera 7. The aim of Android (Go edition) is to bring the power of mobile to 100 million+ active users globally. Android’s Lead Product Manager Arpit Midha explains how it works: 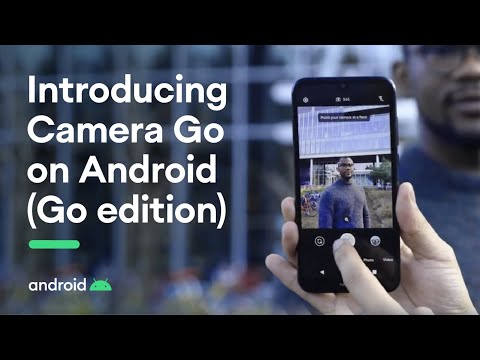 Here we have listed the latest Google Camera Go APK available for download. The APK has been extracted directly from the Nokia 1.3 phone. It has been tested working on many older Android devices including the Xioami Mi A2 Lite, Mi Max 3, Moto E5 Cruise, OnePlus 6/6T phones, and more.

The best part is, it works on the Samsung Exynos processors flawlessly. So for users who have a tough time running Google Camera on their Samsung devices with Exynos processors, can settle for the Google Camera Go. Samsung Galaxy S10e/S10/S10+, Note 10, Galaxy S8 series, S9 series. Our guess is Camera Go APK should work on almost all the Android devices from all the manufacturers.

The Google Camera Go work flawlessly with most of the Android devices out there. So it doesn’t necessarily need a specific Gcam port. This is the Gcam Go port! Simply download to your device, install, and run.

Note: For Google Drive link, download on PC and then transfer it to phone storage and install. Or you may encounter a parsing error. Alternatively, settle for Box mirror or SourceForge.

Here is the first ever Google Camera Go modded APK available for download. Thanks to the developer Parrot043 for the amazing port. It has all the features from the previous versions along with some new ones like HDR mode toggle and a few bug fixes for stability and compatibility. However, being the first ever mod, not all featured are stable.

Generally, the latest Gcam 7.3 ports are targeted towards Android 10 or 9 Pie. So it may not work on Android 8 Oreo. However, Camera Go works on almost all phones running Android 10, 9 Pie, 8.0/8.1 Oreo, or earlier. Also, wait for more Gcam Go ports from developers like Arnova8G2, parrot, urnyx, cstark, dice, BSG, and more.