The AOSP sources (Android Open Source Project) are regularly updates with monthly security patches and Android versions. The latest Android version is 8.0 Oreo which was released not so long ago in the month of August 2017. The monthly security levels hold 3 consecutive Android versions, viz, the 8.0 Oreo, 7.1 Nougat, and 6.0 Marshmallow. Recently, Google opened the Developer Preview program with 8.1 Oreo for some of its stunning smartphones like Pixel 2, Nexus 6P, 5X, and more. Following the footsteps of Google, other smartphone manufacturers also started their own Beta programs to make their software better.

There are several benefits of rolling out the Beta firmware updates. First, the manufacturer can first test its software before releasing the stable one to the mass. Second, users can give feedback of the bugs, features they desire, features they don’t like, etc. This opens up several improvement grounds for the manufacture and the customers as well.

Here, we have listed all the manufacturers rolling out the beta programs for Android 8.0/8.1 Oreo.

Google Developer Previews: As Android is Google’s very own operating system, it makes perfect sense that the tech giant becomes the first one to compile and deploy the upcoming Android Beta versions. Google has been releasing the Developer Previews since the advent of 7.0 Nougat. We have seen v7.1.1, v7.1.2 Nougat, 8.0 Oreo. Here is the first and most anticipated Android 8.1 Oreo developer preview build.

Google’s Developer Previews are basically beta builds to test out the upcoming Android operating system and also the latest features. The AOSP sources are not updated with developer previews due to their beta state. Once the Android OS is out of Beta, the AOSP sources are updated and made public.

The latest Developer Preview from Google is based on Android 8.1 Oreo for Nexus 6P, Nexus 5X, Google Pixel 2, Pixel 2 XL, the original Pixel (XL) devices. According to Android Developers Blog, it comes with several new features like

The previous one brought Picture-in-Picture, Autofill for usernames and passwords in Android apps, test prediction, and much more.

OnePlus Open Beta program: OnePlus becomes the first third-party manufacturer to release the Android 8.0 Oreo update for its OnePlus 3/3T device. The Open Beta 25 for OnePlus 3 and Beta 16 for OnePlus 3T brings the Oreo to these devices. However, it is quite stable for a Beta release. Although, most of the new functions like Picture-in-Picture may not work seamlessly,it is a step forward to making the Android platform more Oreo.

Following OnePlus 3/3T, the manufacturer is all set to release 8.0 Oreo update for its flagship OnePlus 5 and OnePlus 5T. The Beta program for these two devices will soon be released. Moreover, being the sister phones, they receive the same Oxygen OS versions. The current version of Oxygen OS 4.5.13 for OnePlus 5 is live and available for downloads.

So for the Open Beta 25/16, the software development team pushed out Android 8.0 Oreo with several new features. You will also see the October 2017 security patch level with it. 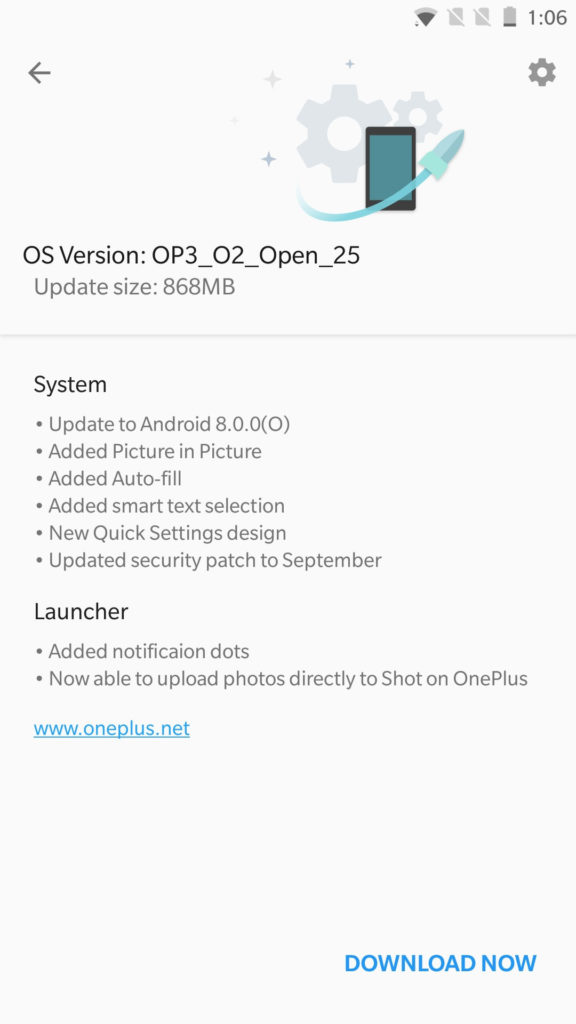 Following is a image for Nokia’s Beta Labs OTA update for Nokia 8. You will see the same changelog as that of OnePlus’s Open Beta program. 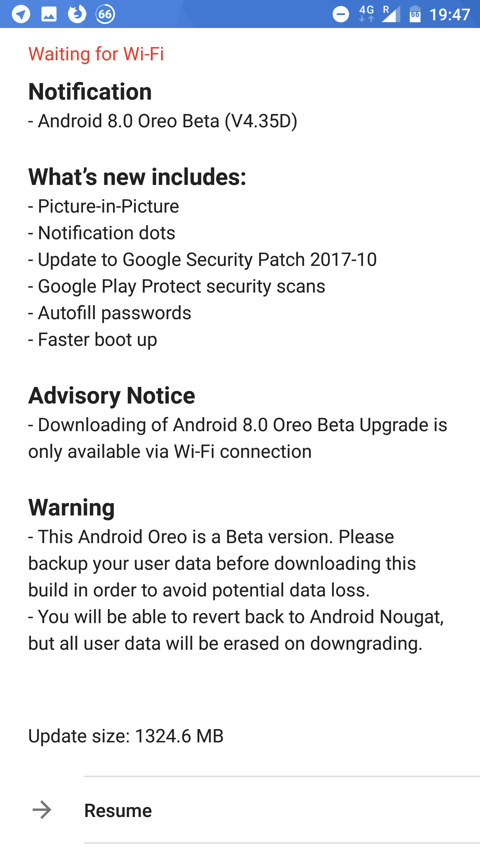 Once you sign up for Nokia’s BetaLabs, your device will receive an OTA notification detailing various features. You can also easily downgrade to previous firmware by flashing the full stock firmware of Nougat via stock recovery. However, all user data will be lost.

Samsung is reportedly working on rolling out the latest Android 8.0 Oreo update for the stunning Samsung Galaxy S8 and S8+. The Samsung Beta program will start on October 31, 2017 in the United States. It will come to the Snapdragon variants first and later spread out to the Exynos based global variants. We may also expect Android 8.1 Oreo later in time.

According to rumors the registration slots are limited for less than 8000 handsets. It will be a first come first serve program. So stay tuned as we will post the same as soon as Oreo is available.

Although Xiaomi is far behind in the Android update game, the manufacturer is busy rolling out MIUI 9 ROM based on Android 7.0/7.1 Nougat. MIUI 9 is one of the most popular ROMS of all time. The latest update features a completely revamped user interface and brings several new features.

The latest firmware update that comes to the Xiaomi’s Mi and Redmi series is the MIUI 9 which is currently in its beta state. The ROM developers are gradually rolling out the stable MIUI 9 global updates for Mi 6 and the Mi Max 2.

Apparently, according to a rumor, the Redmi Note 5 may come with Android 8.0 Oreo out of the box. However, that’s is quite skeptical as Xiaomi devices are still on 6.0 Marshmallow MIUI 8 ROM.

Huawei have had several Beta ROMS based on Nougat and Marshmallow for several devices including Huawei P9, P8, Mate 8, etc. Recently, the manufacturer deployed Oreo Beta update for Huawei Mate 9.

Using Huawei’s Beta APK, you need to sign up for Beta program. Once done, your will receive an OTA notification. Simply tap and upgrade. It is claimed that the former flagships from Huawei’s P and Mate series shall also receive the same. This includes devices like Huawei P9, P10, Mate 10. 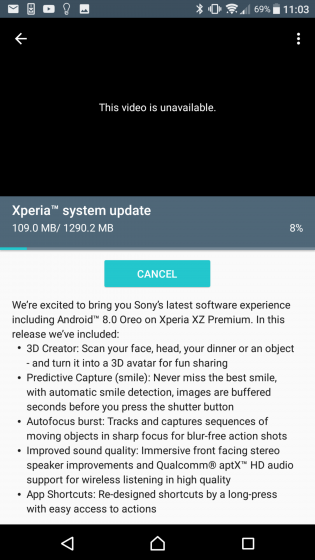 Sony’s Concept ROM is another name for the company’s beta program. Sony produced several concept ROM builds based on Marshmallow for Xperia Z5, Z3, etc in the past.

However, we haven’t seen any Nougat based concept ROMS lately. Sony listed several smartphone models which will receive Android 8.0 Oreo.

We might just see a new concept build for Oreo from Sony.

LG: The manufacturer is way behind the update game. Though LG rolled out Nougat for LG G6, G5, and G4, there is no word regarding Oreo. The 2017 flagship LG G6 is no where to be updated to Oreo.

ZTE: ZTE loves its Axon 7. It is one of the most popular device from the manufacturer. Axon 7 is already running on the latest Android 7.1.1 Nougat. The manufacturer also claimed that it will roll out Android 8.0 Oreo for the Axon 7, Axon 7 Mini, and the Nubia series.

We have seen ZTE Nubia Z11 to with Android 7.1.1 Nougat Open Beta ROM. We might just see a ZTE Open Beta for Oreo firmware as well.

HTC: HTC doesn’t quite believe in rolling out Beta programs. However, most of their devices are on the Nougat update. The manufacturer has confirmed 8.0 Oreo for HTC U11 series and HTC 10 series.

Motorola/Lenovo: The Moto G series used to receive Nougat Beta ROMS. However, they may or may not receive Oreo beta. Motorola is failing in keeping up with the large number of user base and their demands. Same goes for Lenovo. The devices native to Lenovo have get no updates whatsoever and those under Motorola branding are also losing their charm. Unless, the manufacturer does something about it.

Let us know your views about the Oreo Beta programs in the comment section below.