Sony has promised the Android 8.0 Oreo to many of its premium devices including most of the Xperia X series phones. Today, the manufacturer has started rolling out its first Oreo build. The first device to receive the official 8.0 Oreo firmware update is the Sony Xperia XZ Premium device. There are two variants of XZ Premium with model numbers G8141 and G8142 (Dual SIM). The former brings a new firmware build number 47.1.A.3.254 which is based on Android version 8.0. This makes Sony the first manufacturer to release Oreo after OnePlus.

Sony had already shown us the upcoming features like 3D creator. Oreo update on XZ Premium now consists of this 3D creator. It enables the user to render a 3D model of any object including your head, food, books, etc. In simple words, you will be able to create a 3D avatar of yourself.

Another great feature includes predictive smile capture, auto focus burst, improved sound quality, and app shortcuts. These are additional few features other than the stock Oreo goodies like Picture-in-picture, autofill, and much more.

Following the 7.1.1 Nougat firmware for Xperia Z5, Z4, Z3, and all of X series phones, the manufacturer is all set to release Oreo update. As it comes to XZ Premium, we may soon see Android 8.0 rolling out for Xperia X, XZ, XZ1, XA, XA1, etc.

Here are some of the latest new features for this device on Oreo:

3D Creator – Our acclaimed 3D scanning feature first introduced with Xperia XZ1 and XZ1 Compact. It lets you scan your face, head, food or any object, rendering it as a 3D avatar or free-form image in less than 60 seconds, and makes it easy to share on social media with friends or 3D print

Predictive Capture (smile) – Never miss an unexpected ? again, as Predictive Capture automatically starts buffering images when it detects a smile (even before you press the shutter button), allowing you to pick the best from a selection of up to four shots

Currently, the Oreo firmware is only available for the Sony Xperia XZ Premium device. We have also managed to capture the latest stock firmware for the same.

Note that software updates roll out in a phased process. Hence, keep checking for OTA updates from Settings > System updates > Check or OTA updates. Watch out for the notification.

For those who are eager to test it right away can grab the following firmware files and install Oreo using the flasher provided below.

The firmware comes as commercial and journalist build for G8141 which is currently 2GB in size. You can flash it using new flasher tool or the XperiFirm.

The above link will get you the latest firmware and also links to the installation procedure for the Xperia stock firmware file. Alternative way is listed below. 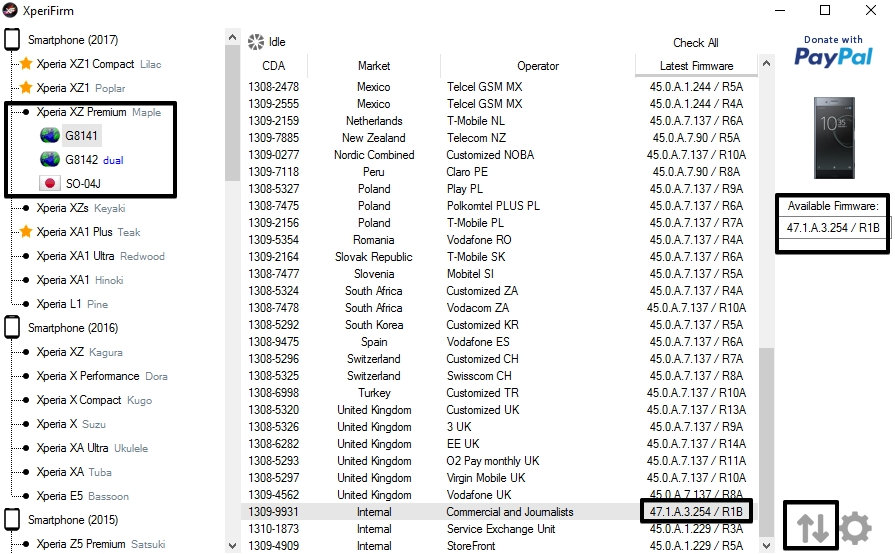 Following you will find the firmware to install using the newflasher tool for Sony devices.

Note: 2017 phones which have usb vid : pid = 0fce : b00b is not supported since use new flashing protocol! Use newflasher tool if your device usbpid is B00B.

Follow us on social media for all the latest Oreo updates.