Updated: Android 10 beta 3 is now available for download for Exynos Galaxy S10 Plus. Samsung Galaxy S10e, S10, and S10 Plus users are enjoying the latest Android 10 update across the globe. The new OneUI 2.0 Beta program started earlier this month officially in the regions of Europe, Asia, North America (United States), and South Korea. This includes almost all the variants of the Galaxy S10 series phones like those with the Exynos processors and Snapdragon processors. Today, Samsung is rolling out Android 10 beta 2 for the Exynos (global) variants for the Galaxy S10 Plus.

The latest One UI 2.0 firmware update based on Android 10 beta 2 brings several improvements to the system. These include the latest security patch level – November 1, 2019. Apart from that, you will also notice improved Camera features with added functionalities like slow motion for front camera. Intelligent Wi-Fi 1.5 also makes it to the Android 10 beta 2. Auto Hotspot feature has also been added. Wi-Fi Tips feature provides users with help tips when something goes wrong with your Wi-Fi connection. Media and devices can now easily control external devices connected to your smartphone. Improved fingerprint recognition algorithm. This fingerprint update also addresses the ongoing controversy about the Galaxy S10 being unlocked with unregistered fingerprint when a screen protector is applied.

While you can still update your Samsung devices to Android 10 via Samsung Members app, here we have listed the OTA update zip files which you can flash manually on your phones. This is especially useful if your device or region is not supported for the beta program. Now, download the latest Android 10 beta 2 OTA update for Exynos variants of Galaxy S10 Plus based on OneUI 2.0 beta 2.

What’s new with the Android 10 beta 2 for Exynos Galaxy S10 Plus OneUI beta 2?

Following we have listed the official Android 10 OTA update.zip file for the Exynos Galaxy S10e, S10, and S10 Plus variants. The OTA is live for all the Exynos variants currently selected in the beta program. Alternatively, you can also manually update your S10 series phones to the latest beta 2 update using the OTA update zip files listed below.

You may want to install beta 1 beforehand:

New update is now available for download for the Exynos Galaxy S10e, S10, and S10 Plus with firmware build ZSK3.

Updated October 29, 2019: So apparently, the Android 10 beta 2 has a bug where users are locked out of their phones upon restart. So what happens is, upon updating to OneUI 2.0 beta 2, some users who have set a PIN or pattern or a password on lock screen were getting locked out because the device would reject the PIN or pattern or password despite inputting the correct one. Samsung has acknowledged this bug and brought the fix for the same. So here is a Android 10 beta 2 hotfix for the same. The OTA features new firmware build number G970FXXU3ZSJL, G973FXXU3ZSJL, G975FXXU3ZSJL for the S10e, S10, and S10 Plus respectively.

Note 1: If you are locked out of your mobile phone, then you can use Samsung’s Find My Device function to unlock.

Note2: Looks like if you have a fingerprint unlock set, then you are good to go. First flash the Beta 2 and then flash the Beta Hotfix. This OTA will take your device from beta 2 to beta 2 Hotfix on your Exynos S10 going from build ZSJF to ZSJL.

Downloads from beta 1 to beta 2

OTA download links now available for all the S10 variants. If you are already on the previous Android 10 beta 1 firmware with build number G975FXXU3ZSJ8, then here is the beta 2 for your Galaxy S10 Plus device with build G975FXXU3ZSJF. This OTA will take your device from beta 2 to the official Beta 1 on your Exynos S10 going from build ZSJ8 to ZSJF. So your device needs to be on the first beta in order to flash the second beta.

The OneUI Beta 2 starts in India (Asia) directly from the Android 10 Beta firmware update. Currently, the beta 2 is live for the global Galaxy S10 variants. The new Android 10 beta 2 firmware build number is G975FXXU3ZSJF. This OTA link listed below will take your device from ASIG -> ZSJF (that is Android 9 to Android 10) for the Exynos S10 Plus global variant. Checkout the eligible criteria for this OTA update from below.

NOTES for eligible devices! The update zips are only for MULTI-CSC OXM! You can check this by dialing using your phone app at – *#1234#, and check if OXM is in the CSC-build.

You may also need:

The best way is to update using the Samsung Members app. For detailed instructions, visit: Samsung OneUI 2.0 Beta program based on Android 10 begins today for Galaxy S10e/S10/S10+ if you live in Europe.

Alternatively, download the OTA update zip from above and installation via stock recovery or ADB sideload method. Check out another tutorial from here for installing OTA updates. Flash Beta 2 and beta 2 hotfix using the SD card method:

Step 2: Download ZSJ8 to ZSJF or ZSJF to ZSJL (hotfix) OTA update zip from above. Rename it to update.zip and transfer the file to your phone’s storage or SD card.

Step 5: Navigate to the update zip file (ZSJ8 to ZSJF) in SD card and hit power button to select it.

Here is a video tutorial on how to install by SStech: (this is ADB sideload method for the beta 1) 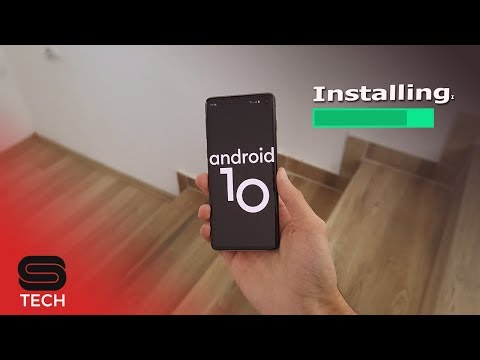 You may also need to know how to restore Samsung Galaxy devices back to stock Android 9 Pie. We will also list Android 10 beta 2 for Snapdragon Galaxy S10, S10e, S10 Plus variants in the Unites States (USA). So stay tuned!