Samsung is currently running One UI 2 beta program for the stunning Galaxy S9 and S9+ while simultaneously rolling out the stable Android 10 build for the Galaxy S10 series and Note 10 series, and, recently, the Note 9 globally. We just posted about the third beta for the Snapdragon S9 and Note 9 variants in the USA. The update seems quite stable for now. However, the global or Exynos variants still need some optimization. So the manufacturer just released a more stable version of the Android 10 for the Galaxy S9 series under the One UI 2.0 beta program. Here is the latest Android 10 beta 5 OTA update for the S9/S9+ with ZTA2 build.

One UI 2.0 beta 5 for the S9 series feature new firmware build numbers G960FXXU7ZTA2 for the Exynos Galaxy S9 and G965FXXU7ZTA2 for the Exynos Galaxy S9 Plus. The update officially brings the latest January 2020 security patch. We got this Android patch in the last beta itself. However, the ZTA2 OTA brings much more to the plate like several bug fixes and improvements to the system. Some of these include bug fix for noise occurrence while playing music via USB C-type + 3.5pi, updated Digital Wellbeing APK to latest version. It also fixed the issue of data loss while moving Contact. The major improvements comes to the camera. Also improved Android 10’s new Gesture Navigation. Checkout the complete changelog from below.

The previous update, however, fixed the crashing issue while settings up iris recognition, improved camera performance, fixed issues for ringtone not available in right side on Bluetooth headset, Audio improvements, fixed no service error, fixed kernel issues, fixed fingerprint authentication is not available while using SPay or SPass, and finally fixed crash issues while calling or messaging.

The size of this new OTA update is around ~112 MB. The latest beta update comes in a small package but brings major bug fixes across the firmware. Here is the complete changelog for OneUI 2.0 Beta 5 currently rolling out in the regions of Europe and Asia. 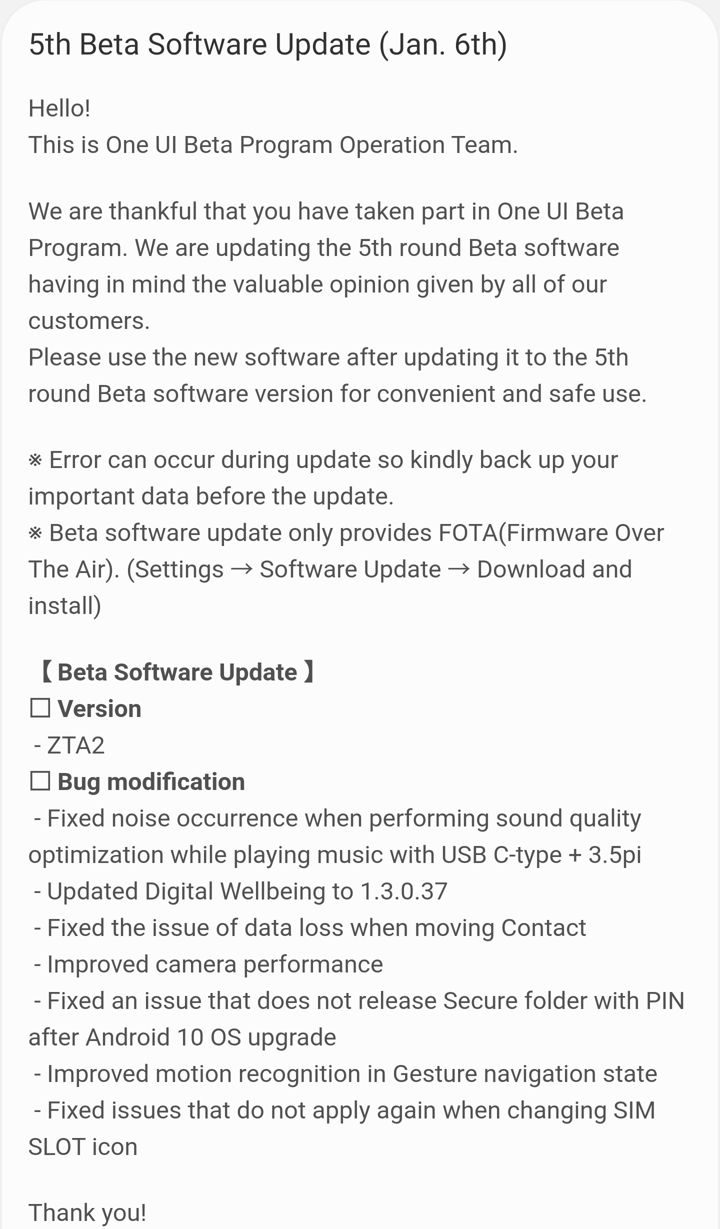 As you can see, this is a very critical update to have if your device is running on the Android 10 beta. The beta 5 OTA update package comes in a small size of 111 MB in size. Download the OTA from below.

The easiest way to update Galaxy device to Android 10 is using the Samsung Members app. However, for the regions where the update is not yet available, you can download the OTA update zip and manually sideload it via stock recovery or ADB sideload method.

The Android 10 beta 5 OTA update zips are now available for download. Get the OTA from below and checkout our popular tutorial on Android 10 beta for the Galaxy S9 and S9+. All you need to do is download the OTA update zip and manually sideload it to your device. Here is how to update Samsung Galaxy S9/S9+ to Android 10 One UI 2.0 beta [OTA downloads].

First, you will need the beta 4 (HotFix):

Solution: Don’t worry, Note 9 got the stable update. S9 will get the same anytime soon. You can use the Odin FlashTool to flash the stock Android 10 full stock firmware. That way you wouldn’t need the OTA updates and have full update by your side.

Also, read the comments for some troubleshooting and help from our S10 tutorials – Download Android 10 beta for Exynos Galaxy S10 based on One UI 2.0.

You may also need to know how to restore Samsung Galaxy devices back to stock Android 9 Pie.