Apparently, Samsung is done with the One UI beta testing program and is now rolling out official stable Android 9.0 Pie firmware update to the latest flagship phones – Galaxy S9 and S9 Plus for both Exynos and Snapdragon variants. The latest OTA update is live for users enrolled into the One UI beta program as well as the users who are on the stable channel. It features new firmware build numbers G960FXXU2CSA6 and G965FXXU2CSA6 with baseband versions G960FXXU2CRLI and G965FXXU2CRLI for the Galaxy S9 and S9 Plus. So here is a tutorial on how to download the latest CRLI stable One UI full stock Odin firmware update for Samsung Galaxy devices.

The latest Android 9.0 Pie update is currently live for the Exynos (global) variant of Galaxy S9 in the European region. Users in Germany and Switzerland have reportedly received the OTA update notification. So go to settings > system updates > and tap on download OTA updates manually. The OTA comes in a package of 1.8 GB in size. However, if you are looking forward to download the full stock firmware for Odin flash tool, then the full package comes for a whopping 4.6 GB TAR file.

Note: The update is now rolling out in the United States for carriers like Sprint, T-Mobile, Verizon, and Unlocked variants with builds SM-G960U/U1 or SM-G965U/U1 and also for the Exynos variants in the regions of Germany, UK, and other countries in Europe. Download full stock firmware from below.

Currently, Android 9 Pie is available in select regions of Europe like Germany and Switzerland. However, you can download the latest available full stock firmware for all the regions using the following tutorial. The firmware come directly from Samsung servers and does not have any speed limit or do not require any subscription.

Soon the stable One UI will be available for the Snapdragon S9 (SM-G960U/U1) and Snapdragon S9 Plus (SM-G965U/U1) in the United states from carriers like T-Mobile, At&T, Sprint, Verizon, or unlocked variants. Use the same tutorial as Exynos below. Just fill in the details correctly.

Following is the simple procedure to download the full stock firmware update and install it via Odin firmware. For reference we are using German variants. 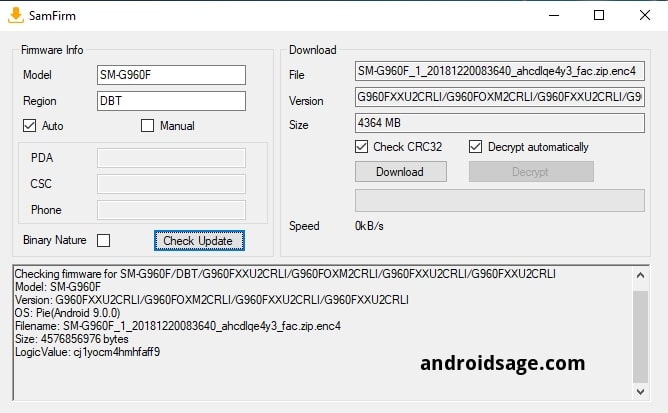