Renowned Android developer, topjohnwu, released another update for his/her most ambitious project called Magisk. Magisk is the most popular rooting tool for most Android devices in 2019 and further. The latest Magisk v20 stable version comes in support for the official Android 10 firmware update that Google released just last month with September 2019 security patch level. The developer quotes “Enjoy Android 10” in the changelog. Although Magisk v19.4+ brought support for Android 10, that was a beta version. The latest Magisk v20 stable version is now available for download.

Google has made it obligatory for third-party smartphone manufacturers to release all the new new Android devices launched after January 31, 2020 to feature the latest Android 10. So the latest Magisk v20 will come in handy for all you rooting needs in 2020. Plus, most OEM manufacturers have already started rolling out Android 10 for their latest flagship phones. Google Pixel 3, 2, 1, OnePlus 7 or 7 Pro, Essential phone, Samsung Galaxy S10, Xiaomi Redmi K20 Pro, etc. have either already received or being beta tested for Android 10. So you can start testing root for all the various devices running Android 10, 9 Pie, 8.0/8.1 Oreo, and earlier with the latest Magisk 20 zip. The latest and previous version of Magisk can root most Android devices all the way down to Android 4.2.

Magisk Manager has also been update to v7.3.5 with some UI changes. The app already got a redesign for better ease of use in the previous updates. The latest Magisk Manager APK can now be installed on Android 10 as well. It also brings better support for pre-5.0 running devices. Most importantly, you can now sort installed modules by name. So you should use the latest version on all your devices. You can simply update to v20 from previous Magisk 18.1 version by flashing the zip file via latest TWRP recovery listed below.

Magisk Manager is a supporting application for rooted Android phones or tablets. You will need both- Magisk zip (installed via TWRP recovery), and Magisk Manager APK (installed as normal app). Downloads are listed below. All the technical details have been listed below in the update log.

Here is the Magisk 20 installed on OnePlus 7 device: (Thanks to djvita for the image) 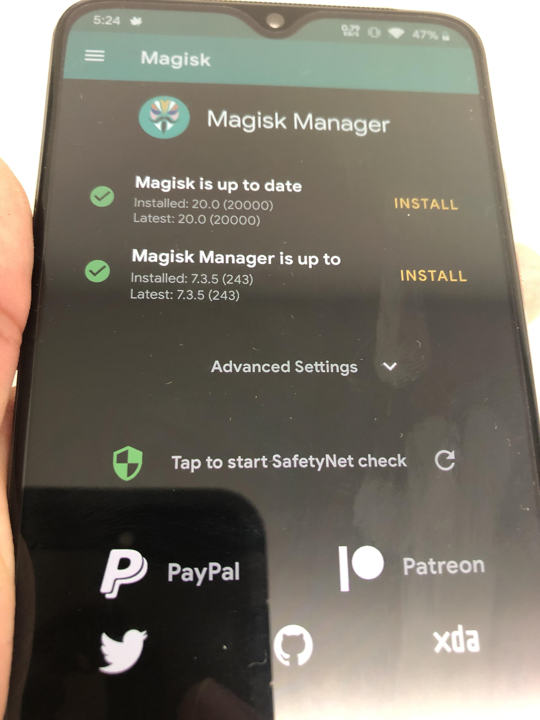 Use either the stable or beta Magisk v20+ zip and flash it via TWRP recovery to root Android devices running Android 9.0 Pie, 8.0/8.1 Oreo, 7.0/7.1 Nougat, Marshmallow or earlier. You may also need to install Magisk Manager APK after you have booted into the system.

In case you don’t want Magisk or want to completely unroot your Android phone, then flash the Magisk uninstaller zip via TWRP recovery.