Samsung just released their latest flagship S-series smartphones called the Galaxy S20, S20 Plus, and the stunning S20 Ultra. These devices come with Android 10 OTA update out of the box based on Samsung’s brand new One UI 2.1 firmware. Moreover, just a few days ago, the manufacturer pushed this new update (One UI 2.1) for the previous generation phones as well including Galaxy S10, Note 10, Galaxy S9, and Note 9 across the globe. The new One UI 2.1 firmware comes with amazing new features. One of the most intriguing features we are sharing here is the Quick Share APK.

Android phones counter every feature of the iPhones with their own versions. There’s one feature that almost all Android OEMs lack compared to iOS ecosystem is Airdrop feature. Google recently announced that it is working on a similar feature called “Nearby Sharing” and will be rolling out most likely with the stable Android 11 or later versions. However, that didn’t stop Samsung from implementing it in Android 10 itself. So without waiting for Google to bake this feature in Android, Samsung made their own sharing app called “Quick Share”. Here, download and install Samsung Quick Share APK on your Android devices.

Although Quick Share is a feature from One UI 2.1 firmware update, a Reddit user was able to successfully install Quick share on Samsung S9 running Android 10 based on One UI 2.0. So users having Samsung phones running One UI 2.0/2.1 can download Samsung’s Quick Share APK and try if it works on their phones. The link for downloading the APK is provided below.

The Samsung Quick Share made its debut with the S20 series which is running one One UI 2.1 based on Android 10. At the time of launch, it was working only on the S20 series. Here is a demo of the Quick Share and Music Share on the Samsung Galaxy S20 by Jimmy is Promo. 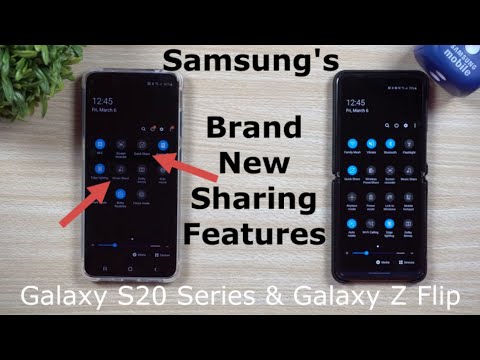 Samsung claimed that they are working on making quick share available to other Samsung smartphones as well. Users having Samsung smartphones having One UI 2.0/2.1 running can try sideloading the APK and try if it works for them. This includes Samsung Galaxy S10, S9 series, Note 9, and Note 10 series as well.

Samsung’s Quick Share will work in a similar way as other local sharing services work. If a device that supports quick share is nearby, their device will show as available to share and users will be able to send or receive documents, images, videos, songs or any other file between each other. Users can block receiving files from randomly anyone. It also has a feature that will allow the people who are in Samsung social contacts to send files seamlessly.

Additionally, Samsung is also providing cloud services where users can temporarily upload files to Samsung Cloud from your smartphones. Which then they can stream them on smart TVs. It will give a seamless sharing and streaming to users having Samsung Smart TVs and Samsung smartphone as well.

This could be a game-changing feature for Samsung. Because as of now there’s no good file transfer service available for Android users except third-party apps like ShareIT, Xender which is full of advertisements and it is very much unreliable.