Updated: Google released stable Android 11 on September 8, 2020 for the Pixel series devices. The factory images, AOSP source code for developers, and the stock GSI (Generic System Image) for Android 11 are now available for download. We have also listed the stunning Efran GSI builds below. The best thing about Efran GSI is that it gets you the complete Google Pixel experience on your Project Treble device. This includes all Pixel features, apps, and OS all at the same time on any Android. Head to the downloads section below!

This is the 11th iterations of Android OS and it comes packed with many new features. The existing features also hint at some upcoming functionalities in the next Pixel series phones. Such as battery sharing in support for wireless charging of Bluetooth ear buds using your phone. See more about Android 11 from the video below.

So if you want to test out the Android 11 onto your smartphone, here are the latest Android 11 R GSI (generic system images) for all the Project Treble enabled devices. GSI, if you don’t already know, are generic Android OS builds that can be flashed onto any Project Treble enabled devices. This is especially useful if you are looking forward to manually updating your phone to the latest Android firmware update. You can read more about Project Treble and Android GSI online for a more detailed info.

The latest official Android 11 GSI builds (generic system images) are now available for download officially from Google servers too. For the Pixel phones, checkout the official Developer Preview downloads repository here by Google. We also have the custom Android 11 GSI by Erfan Abdi for Project Treble devices; for rest of the Android phones. Visit the download section below.

Here is the full review and top new features of Android 11 from zollotech: 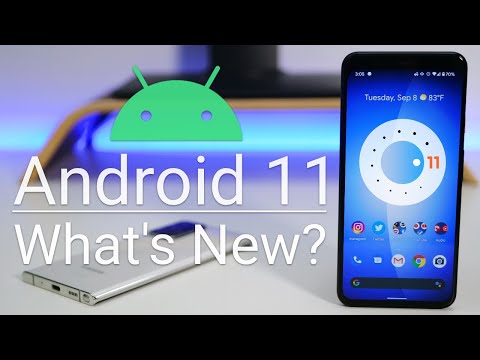 Here are the official Android 11 generic system images by Google from the Pixel phones. These can be installed on any Android phone with support for Project Treble. These images also come with GMS (Google mobile services). So you don’t need to install Google apps and services separately. It also includes ARM 64 + GSM, ARM64, and x86_64 CPU architecture. Here are the details of the latest Android 11 GSI:

Here are the custom Android 11 GSI builds for several Android smartphones from different OEM manufacturers. Currently, only Google Pixel GSIs are available for download with a few bug fixes. These GSI builds come from the popular EfranGSI Telegram Group. The developers behind the Android R GSI group are very active and constantly rolling out new versions of the latest Android 11 GSI ROMS. So keep checking the full downloads repository from below for new bug fixes. In the future, as Android 11 officially releases and more manufacturers start rolling out Android 11 firmware updates, we will see Android 11 R GSIs from Samsung One UI, OnePlus Oxygen OS, Xiaomi MIUI, Asus Zen UI, Flyme OS, Hydrogen OS, NubiaUI, Moto, Candy ROM, Xpieria, Pixel, and many more. Here are the details of the latest Android 11 EfranGSI:

How to Install Android 11 Q GSI on Project Treble devices?

Step 1: First of all, check if your Android phone supports Project Treble. You can use the following app to check that. Generally, Android phones launched with Android 8.0 Oreo or later support Project Treble out of the box; are treble enabled.

Step 2: Also, check if your device is A-only or AB

Note: Installing an already existing Project Treble ROM on your Android device before flashing GSI is a good option too. So even if your current firmware does not support Treble, you can still grab a treble enabled ROM and flash via TWRP recovery beforehand.

Note 2: While you can also install GSI using fastboot methods, TWRP recovery is highly recommended for non-Pixel phones. You never know what could go wrong.

Note 3: Permissiver & Zygote Fix are not needed on Android 11 GSI or any GSI build after 25th September. Also, A/B devices never needs zygote fix. Next up, you can simply download the Android Q GSI and flash it using a custom TWRP recovery on Treble supported Android device. See the brief tutorial on How to Install GSI on your Android device.

Make sure you have Unlocked the Bootloader and flashed the latest TWRP recovery onto your device.

The latest Google Play services 20.06.15 beta should work on the latest Android 11 GSI.