Original: Android Q is going to be the next version of the most popular mobile operating system in the world. This is the tenth iterations of Android OS and it comes packed with many new features. These features include a native system wide dark mode or night mode, advanced or complete control over Android permissions using permission usage section, possible accent and font options, and time to read feature. So download Android Q GSI right now!

With the new permissions usage section under Privacy tab in settings app, you can control all the permissions that certain apps are using. Moreover, you can monitor the permission used by a certain app in real time right at the status bar. The dark mode can be activated from the Developer Options and can also trigger some apps to get native dark mode feature. Most importantly, there is a new option in the Accessibility settings called Time to read where you can control the time of heads up notifications that appear on the screen.

There is also a new Desktop mode under Developer Settings that we may see more about once the Android beta program kicks in. Maybe something like Samsung Dex? Android Q may also support accent colors or fonts similar to Oxygen OS, and support for native face unlock feature for all.

The Android Q beta program that will start likely in mid-March and stable builds will be available in 2019 itself. Moreover, here we have the early builds of the Android Q GSI (Generic System Image) even before the Android 10 Developer Preview builds. You can flash the GSI images onto your Project Treble supported Android phones.

Here is the full review and top new features of Android 10 from zollotech: 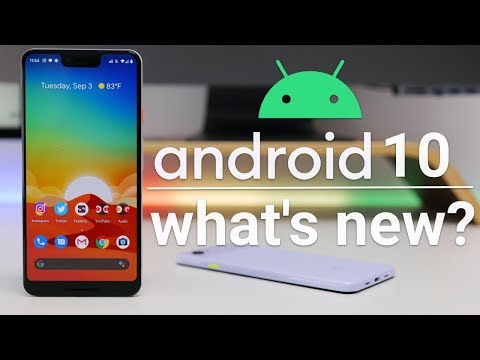 Here are the custom Android 10 GSI build for several Android smartphones from different OEM manufacturers and their firmware like One UI, Oxygen OS, MIUI, Zen UI, Flyme OS, Hydrogen OS, NubiaUI, Moto, Candy ROM, Xpieria, Pixel, and many more. You can use these latest Andorid 10 GSI builds and install it on your Android devices for the latest update.

Thanks to Erfan Abdi for the amazing Andorid 10 GSI builds found in his Telegram group.

Note that this only works on Android 9 Pie and 8.1 vendors. Quick installation instructions: (detailed instructions below)

How to install on AB:

How to install on A-Only:

Following is the latest GSI based on the latest Android 10 Q early builds from January, 2019 security patch.

You will also need:

You may also like to join these Android Q Telegram groups for further queries.

How to Install Android 10 Q GSI on Project Treble devices?

Step 1: First of all, check if your Android phone supports Project Treble. You can use this app. Generally, Android phones launched with Android 8.0 Oreo or later out of the box natively enabled with treble support.

Step 2: Also, check if your device is A-only or AB

Note: Installing an already existing Project Treble ROM on your Android device before flashing GSI is a good option.

You can simply download the Android Q GSI and flash it using a custom TWRP recovery or Fastboot mode on Treble supported Android device. See the brief tutorial on How to Install GSI on your Android device.

Make sure you have Unlocked the Bootloader and flashed the latest TWRP recovery onto your device.

How to Install Google Apps (GApps)