Finally, after a long wait, the official Xposed build for the latest Android 7.0/7.1 Nougat is here for device with arm, arm64, and x86 architecture. The official developer – Rovo89, today, announced and successfully deployed the new Xposed v88. This comes to us officially and several users have already tested on their device. Once such device is the OnePlus 3. The developer claims that this Xposed framework build is very stable for Nougat; as opposed to the unofficial ones. There are basically two builds SDK 24 for 7.0 Nougat and SDK 25 for 7.1 Nougat listed below.

Rove89 also stated that the development for Android 8.0 has begun and we will soon see a new build of Xposed v89 for Oreo. There are no issues with ART or instability. Meanwhile, you can easily grab the latest Xposed build from below and flash it via TWRP. You will also need the latest Xposed Installer APK v3.1.2 to use all the various modules.

We already have the unofficial builds of Xposed brought by PurifyOS called unofficial Xposed for Nougat and the rooting developer Magisk – Xposed via Magisk. We have also listed Xposed for Android 5.1 Lollipop and 6.0 Marshmallow.

How to install official Xposed on Nougat?

The downloads are listed at the end. Before you begin flashing Xposed, go through requirements and see what we are doing.

The installation procedure is same as that of flashing any custom package using TWRP. Except here, we don’t need to wipe data or system or anything. Simply flash the proper Xposed v88 zip for your Android firmware and reboot to system. Later, start using Xposed app.

Before you begin, go through the following requirements:

If your phone already has TWRP recovery installed, then directly head over to the Xposed Framework installation procedure.

Step 1: Download Xposed v88 Framework zip file, Xposed Installer APK, and Xposed Uninstaller for your device from above. If your device is running 7.0 Nougat then get the SDK 24. For 7.1 Nougat or above, get the SDK 25. Also, check the processor architecture of Android phone.

Step 2: Transfer all the Xposed files to phone’s internal storage or SDcard. Place the files where you can easily locate them.

Step 3: Reboot Android into TWRP recovery. If you have Advanced Reboot turned on, then hold the Power button and choose Reboot to Recovery option.

Step 4: Once into TWRP, take a full Nandroid backup. Click Backup option and select all the partitions including the system, data, boot, recovery, EFS, and cache(optional).

Step 5: Go to the home screen again and tap on Install option. Navigate to the Xposed Framework zip (xposed-v88-sdk25-arm64.zip) file in your device storage. Select it and swipe right on the confirmation action button below to begin the installation.

Step 6: Once installation completes, you can wipe the Dalvik cache or simply choose reboot to system option.

Step 7: The First reboot may take some time. From the system, install the Xposed Installer APK. 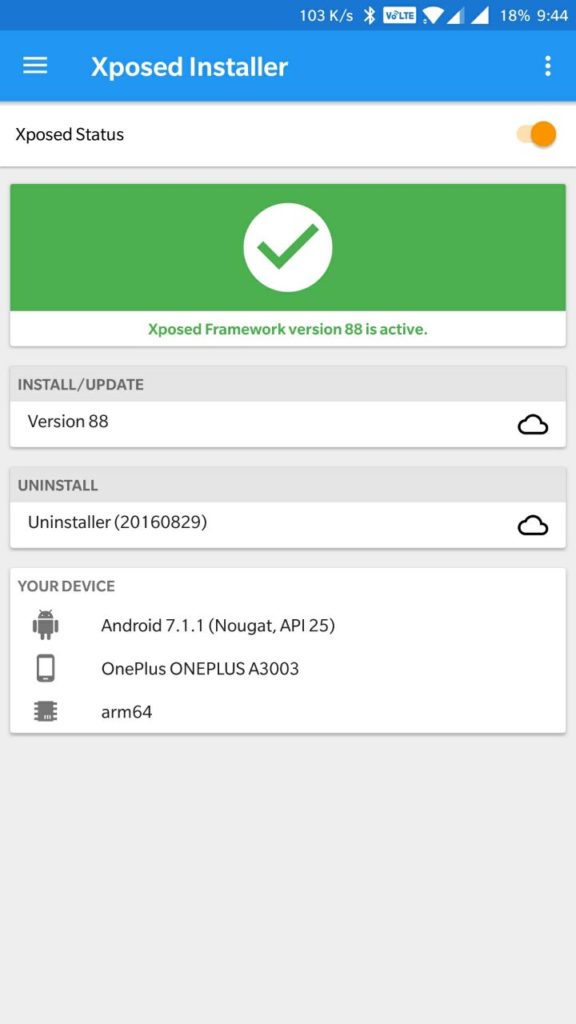 If the system doesn’t boot after Xposed Framework, then wipe Dalvik Cache. You can always flash the Xposed Uninstaller.

As a last resort, restore the TWRP backup that you just took. Also restore device to stock by flashing full firmware image. Like and share us on social media. If you need any help, then comment below.

The following builds are for devices running Android 7.0 or 7.1 Nougat officially. Do not try them on Oreo or previous builds like Marshmallow. For the previous builds, you will need Xposed v87 or earlier.

For previous Android versions like 5.0 Lollipop and 6.0 Marshmallow, visit this tutorial.

Read: How to confirm your Android device’s architecture arm, arm64 or x86?