Whereas, the previous Android 8.0 Oreo builds were G950FXXU2CRED and G955FXXU2CRED for S8 and S8+ respectively. The OTA weighs around 513.41 MB and is based on Baseband version G950FOXM2CREB and CSC as G950FXXU2CRE3.

We have already received April 2018 Security Patch OTA update with firmware build numbers G950FXXU1CRD1 and G955FXXU1CRD1 respectively last month. The OTA is live across the globe in Europe, USA, Asia, Canada, Australia, etc. Following successful deployment of Android 8.0 Oreo based Samsung Experience 9.0 firmware, it is time to polish the existing ROM. Hence, the manufacturer released a couple of OTA updates. Today, a lot of Galaxy S8 and S8+ users are receiving March security update as well. It features the new CRC7 build number as opposed to the CRB7 from February. As of now, only the Galaxy S8+ users are able to receive the OTA notification. So download and install Galaxy S8 (Plus) CRC7 Odin firmware.

The Samsung Galaxy S8 and S8 Plus global variants are now receiving the latest March 2018 Android Security Patche. This comes with new firmware build numbers G955FXXU1CRC7 and G955FXXU1CRC7 for the SM-G955F/FD and SM-G955F/FD respectively. The OTA is currently only rolling out in European countries like Germany. Other countries in Europe and Asia will soon receive the same. So you can either wait for the OTA to arrive or download the full stock firmware from below. 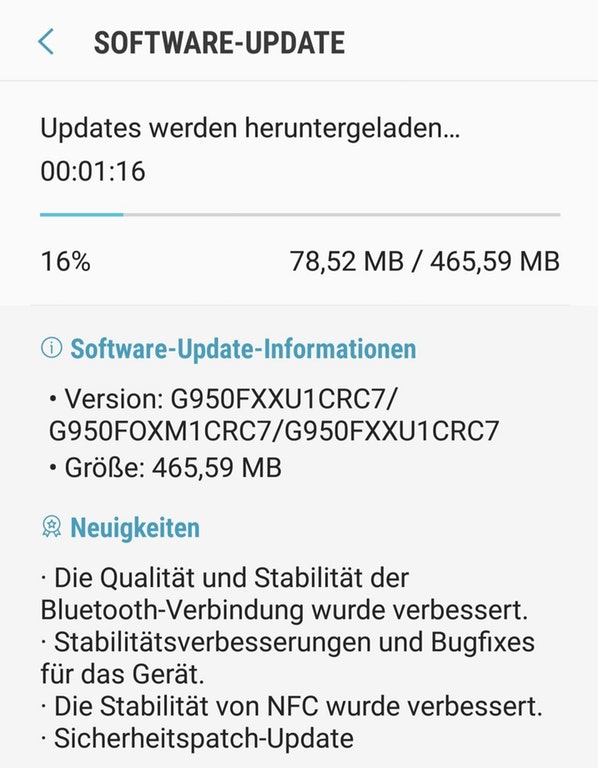 The OTA weighs over 570 MB in size and brings several bug fixes, vulnerability patches from March AOSP sources. Apart from the AOSP changelog, Samsung-only bug fixes are related to Bluetooth improvements, and NFC.

Step 1: First, download and install the SamFirm tool onto your Windows PC. This will let you download the full firmware file from Samsung Servers. For the Samsung Firmware tool, visit this tutorial.

Step 2: Later, launch the SamFirm tool and input the model number and the Product or CSC code for your device.

Step 4: Once the firmware has been downloaded on PC, extract the zip file to get a file with a .TAR extension.

Step 6: Connect your S8 device to PC, and add the firmware files to Odin software.

Step 7: Check the connectivity and start the upgrade procedure and let the installation begin.

Step 8: That’s it. Reboot your Android device and enjoy your new Oreo ROM.