Samsung recently released the latest Android 10 beta software update for the Galaxy S10 and Note 10 series phones in many countries across the globe. The latest update is based on Samsung’s new innovative One UI 2.0 firmware. It features new and improved user interface, gesture navigation system, new animations, new folder designs, and the latest One UI launcher. This is an overall improvement to the previous OneUI Home from  Android 9 Pie; which was highly appreciated. So download the latest One UI 2.0 Launcher from Samsung’s Android 10 firmware update.

Yes, the One UI 2.0 Home APK or launcher app from Samsung’s OneUI 2.0 firmware based on Android 10 can now be installed on older smartphones like the Galaxy S8, S8+, Note 8, Galaxy S9, S9+, Note 9. Even the flagships Galaxy S10e/S10/S10+ and Note 10 running Android 9 Pie. The first thing you will notice in the new and updated One UI 2.0 Launcher is the new folders UI. It has been optimized for easier one-handed operations. It also features the new animations. However, animations are a part of the operating system and the version of Android you are running. So the new animations for closing and opening apps are Android 10 exclusive for now. You can still get some animations on your Android 9 Pie running devices with the new Good Lock 2019 apps. You may need to do some configuration.

The finder search is now just “Search”. The wallpapers option in the page preview UI has now been merged into themes. The borders have been removed from folders. You now get transparent folders. Plus, it keeps all the features from the original OneUI Launcher from Android Pie like the toggle for rotating home screen to landscape mode, swipe down to open notification panel, app icons and badges, home screen and app drawer grid options, toggle between two home screen layouts, and much more.

One UI 2.0 Home coupled with the new Good Lock 2019 is the best deal you get for Android 9 Pie on your Galaxy devices. You will also like our previous posts on the best Samsung themes you can get along with the best icon packs available on the Galaxy Store.

The new One UI Home Launcher from Samsung’s Android 10 firmware has been updated to version 11.0.05.15. While this new launcher is meant for One UI 2.0 on Galaxy S10, it can also be installed on older Galaxy phones like S8, S9, Note 9, 9 using the following trick.

Following is the latest Samsung Android 10 One UI Launcher APK available for download. This will work on Android 9 Pie or later running devices because the app is targeted for 9 Pie or later.

You will also need App Cloner:

Note: For the Google drive link, do not install it directly from the drive app. Download to PC, transfer to phone storage and then install. Or simply use the Box mirror link or the app store links below.

How to Install One UI 2.0 Launcher for any Samsung Galaxy device?

Here is the direct link to the latest One UI Home and Samsung Experience Home official download link from the Play Store and Galaxy Store for devices running Android 9 Pie, 8.0 Oreo, or earlier.

Here is a video for the process by YouTuber Universe: 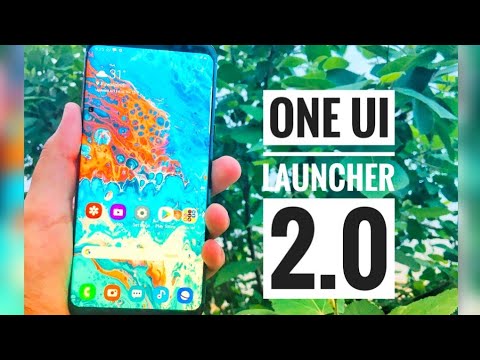 Thanks to u/Skylinee_ for the instructions