The Android 10 launcher we have listed below is the direct port from the Google Pixel series phones running latest update. This means you get all the new features from Google Pixel phones. This Android 10 Launcher has one sweet feature you may fall in love with. That feature is the Dark Theme mode support. You can set it to auto or always directly from the home settings. However, your device should support native dark theme mode. The Pixel Launcher will respect whatever mode you have turned on including the dark mode (or Night Mode on Samsung). So all the Android device running 9.0 Pie or later. You see, Android Oreo or previous versions do not have native dark mode. So the Android 10 launcher will simply make the background transparent without proper API support.

Here is the modded version of the latest Android 10 Launcher (Pixel Launcher 10) that should run on almost all smartphones including Samsung, OnePlus, Sony, Xiaomi, Nokia, Vivo, OPPO, Essential, LG, Techno Mobile, Asus, Huawei, Realme, and more. While the Pixel Launcher is targeted towards Android 10 or 9 Pie, the modded version can also run on Android 8.0/8.1 Oreo or earlier. It features the newest material design 2 that we have seen in many Google apps lately. This Pixel launcher also has improved stability, bug fixes, and brings a revamped design to your phone.

We already have the previous version of the Android Q launcher from the beta version which worked for all Android devices. Here are some screenshots of the previous Android Q beta launcher. It did not come with dark mode, or dark theme.

Here is the modded Pixel Launcher from the latest Android 10 version modded for all the Android device running 8.1 Oreo or later. Not tested on previous Android versions like 7.1.1 Nougat, 6.0 Marshmallow, or 5.0 Lollipop. The listed below launcher for rooted devices may also work on non-rooted device. So check it out.

Note: For Google Drive link, download on PC and then transfer it to phone storage and install. Or you may encounter a parsing error.

This is just a launcher. It does not come with the new swipe gestures from Android Q or the system-wide dark mode. However, it will respect your phone’s default navigation gestures, theme, icon packs, and more. You can enable dark mode from developer options or toggle night mode using ADB commands. You can also combine the launcher with the best Samsung Themes!

Here is the modded Android 10 Launcher port that features the new gesture animations for rooted Android 9 Pie phones. The launcher enables new animations for swipe up to go home and while switching recent apps. It also has the new Android 10 gesture navigation for supported devices. New swipe down for notification drawer, and Dark theme is also included under home screen settings. APK download below.

Here is the video preview of the Pixel Android 10 Launcher APK: 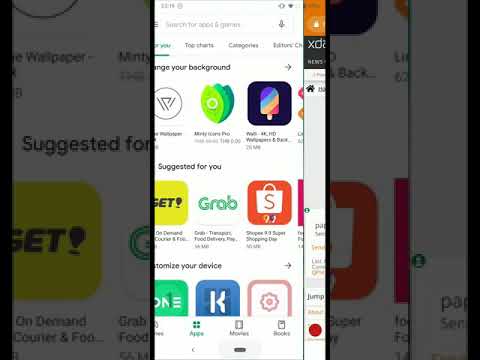 How to install? For full functionality, you will need a rooted Android device via latest Magisk Manager. Install the QuickSwitch Magisk module, select the launcher and reboot. Set it as the default launcher. Open home settings, select “Developer options” and then enable gestures in there.

Thanks to XDA developer paphonb for the Android 10 Launcher. Here is the complete downloads repository.