Samsung probably likes playing “expect the unexpected”card with its users. Right from the start of August, we are seeing every other Samsung device is getting the latest security updates.Then we saw some older flagship devices getting the firmware updates. That too those running on older version of Android OS. And we even stated that there are no slated OS updates for the older devices. But Samsung took everyone by surprise as it rolled out the official Android Nougat 7.0 update for Galaxy S5 Neo. Here we must mention Galaxy S5 Neo has crossed its two-year timeline for receiving OS updates. So, its users are in for tasting the sweetness of Nougat. This update is rolled out of Canada by three different carriers Telus, Koodo and EastLink as OTA updates. In a matter of few weeks, it should reach other devices around the world.

The Nougat 7.0 update will take the Samsung Galaxy S5 Neo to the firmware build number G903WVLU1CQH4. This Nougat 7.0 update for Galaxy S5 Neo is based on the latest August 2017 security patch update. Also, needless to say, the Nougat 7.0 bundles together various cool features such as Merged notifications, Google Doze, DND etc to name a few.The  OTA is rolling out in waves. So not every device will receive the update right now. But You can manually download and install the Nougat 7.0 firmware directly from Samsung servers too.

This Nougat 7.0 update for Galaxy S5 Neo with build number G903WVLU1CQH4 is being rolled out by three different carriers of Canada. So, let us take a look at the firmware info rolled by each carrier.

How To Download Nougat 7.0 Update for Galaxy S5 Neo?

For a faster speed and absolutely free download, You can download SamFirm tool listed here. It will download Galaxy S5 Neo full stock firmware update directly from Samsung servers. You can use it to restore the device to complete stock. 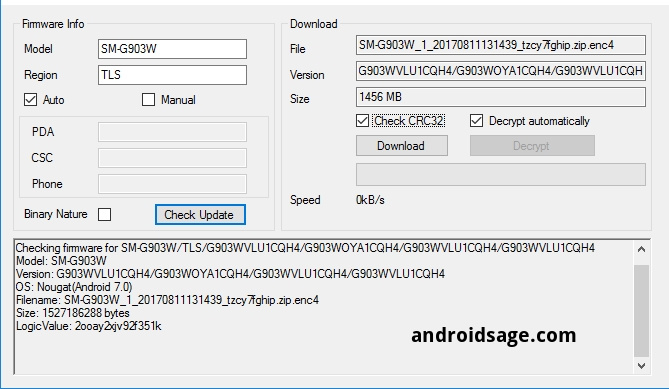 As seen in the above image, you can download the full stock firmware for any Samsung device by just typing in the model number and the CSC code or region it belongs to.

How to Install Nougat 7.0 Update for Galaxy S5 Neo

Well, there can be two ways through which You can install the latest Nougat 7.0 Update for Galaxy S5 Neo. You can capture the OTA update and install the update as it becomes available for your device. Or the second way is to Download the firmware directly from Samsung servers and restore the device to stock firmware using latest Odin Tool.

How To capture OTA Update?

Get the Nougat 7.0 for Galaxy S5 Neo via over the air:

And let us take a look at the second way to install the Nougat 7.0 update.

The installation procedure is pretty simple. Here is a short guide to update. For a detailed tutorial, head over to this tutorial.

Therefore, grab the Android 7.0 Nougat update for your Galaxy S5 Neo device ASAP and experience the sweetest release of Android in your hands.