Samsung never disappoints when it comes to security updates .Probably it is one of the reasons why it is dubbed as a smartphone giant and it has a popular user base. Just recently we posted about how Samsung became the 1st one to drop the August security update for Samsung Galaxy J7 Prime. And keeping pace with that Samsung has yet again rolled out the August 2017 Security Update for Galaxy S7 Edge. The firmware update is rolling out in Mexico for now. But it is soon expected to hit the other parts of the world in due course of time. The update is rolled out Over-The-Air. So, it might take a while to reach your device.

This brings the firmware build number G935FXXU1DQH3 to the Mexican variants of S7 Edge. Needless to say, this update is based on Android 7.0 Nougat. And you can also download the update firmware directly from the Samsung’s server and install it manually. We will provide the complete guide to install the August 2017 Security Update for Galaxy S7 Edge.

Let’s see the firmware info of the August 2017 Security Update for Galaxy S7 Edge in a nutshell. 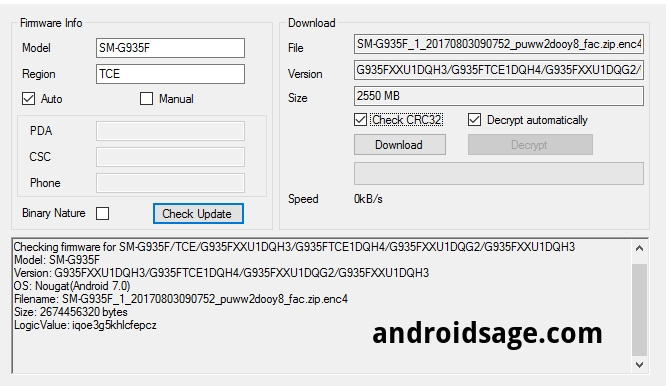 How to install August 2017 Security update for Galaxy S7 Edge

There are basically two ways to install the August 2017 security patch updates on Samsung Galaxy  S7 Edge. The first one is to download OTA(Over the air) update and install it via stock recovery. The second way is to directly download the firmware from Samsung servers and restore the device to complete stock via latest Odin Tool.

Step-4 Wait until you receive an OTA notification.

The OTA is rolling out in waves. So not every device will receive the update right now. You can use the alternative Odin firmware flash method for that.

Step 4: See how to flash or restore the device to complete stock using Odin Tool.

That’s it enjoy the update.