It’s just the first week of March and yet another leak for Samsung Galaxy S8 has surfed online. The official unboxing day for the latest flagship killer Galaxy S8 (Plus) is 29th March, which is this month. Samsung is trying it really hard to gain attention with these systematic S8 leaks. Smartphone leaks are not new. Manufacturers have been displaying their products through factory images and videos since long. Furthermore, the front face leak of the S8 might give you some idea of what the next flagship phone looks like.

The S8 is the most anticipated phone of 2017 and it will run the latest Android 7.1.1 Nougat out of the box. Although we are getting the S8’s flavor bite by bite, it’s competitor the LG G6 has already been unveiled at the MWC 2017. Meanwhile, we have seen the G6’s camera, which is the major highlight of the device. We also assume that the S8’s camera would be as stunning as the G6. Moreover, you can check the latest image for the Galaxy S8 as given below.

BGR today leaked the images of the Samsung galaxy S8 device. The front panel shows the UI. It has similar edges as that of the LG G6. The image also gives a glimpse of the Samsung S8 UX.

Here are all the ports of the Galaxy S8. It has a USB Type-C, a headphone jack, speakers, and a mic hole.

Previously, it was skeptical whether Samsung will skip the headphone jack or not. But the above image clears that picture undoubtedly. You will also notice a 3.5 mm headphone jack along with Type-C USB charging port. Similarly, the below image clearly shows that Samsung has labeled it as confidential, which also reads- no photos allowed, not for sale and do not leak info. The images do not clarify whether it is the Galaxy S8 or S8 plus.

YouTuber, 505nick, has captured a 5-sec video last night which gives you the idea of how the new Samsung device would look like. It, however, doesn’t even reveal the device from all sides. This picture has been taken from the video.

The captured Galaxy S8 stock apps can provide you with the latest Samsung user interface. Moreover, If you have missed our posts from the MWC 2017 event, here you go: 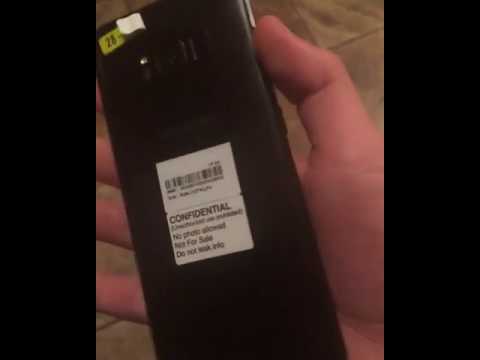