One of the most popular China-based smartphone manufacturer, OnePlus, has already rolled out the latest Android 7.0 Nougat based Oxygen OS 4.0.1 firmware upgrade to its flagship phones including OnePlus 3 and the 3T. Moreover, the Oxygen OS 4.0.2 has also been confirmed. Alternatively, the company has also released the beta testing version under its Open beta program.

However, switching between the two firmware is not possible using adb sideload method. Upgrading to latest Open Beta 10 from Oxygen OS 4.0 is possible via adb sideload. However, restoring the official stock OOS 4.0.1 via sideloading is not possible. This tutorial will show you how to do it with a simple Android application and without any data loss and even with a locked bootloader.

Update: This post has been updated to work with OnePlus 5, OnePlus 3 and OnePlus 3T. This tutorial can be helpful in:

Features of this guide:

If your device is running Open Beta 10 or the Beta 1 for OnePlus 3 & 3T respectively, the sideload method fails for most of the users to switch back to the stock official Oxygen OS 4.0.1. This guide will show you exactly how to easily switch between the Beta version, official Oxygen OS, and the Hydrogen OS as well.

How to install Hydrogen OS or Oxygen OS via Local Upgrade method?

This can work with OnePlus 5, OnePlus 3, and OnePlus 3T. Here are the steps:

The device will automatically reboot and perform an upgrade. First boot may take a few minutes. If it doesn’t, you may want to perform a factory reset. However, doing so may result in loss of data.

First, download the full stock firmware file form your Oneplus 3/3T. Next thing you will need it the Local upgrade application. Transfer all the files to your OnePlus’ internal storage.

For reference, we have installed the OnePlus 3 Oxygen OS 4.0.1 over the Open Beta 10. You can later revert back to the Beta version using the same procedure or even install the Hydrogen OS based on the Android 7.0 Nougat.

The device will automatically reboot and perform an upgrade. The installation may take a few minutes. But the device will surely boot. If it doesn’t, you may want to perform a factory reset. However, doing so may result in loss of data. So be patient and let the upgrade do its thing.

Check out the video tutorial for the same: 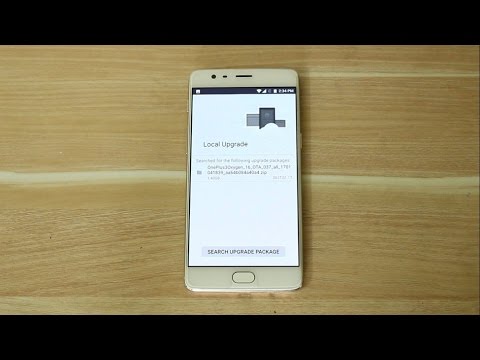 You may use the adb sideload method to go from OOS 4.0 to Open Beta. Also, see how to install OnePlus OOS/Beta update via TWRP.