We already posted about the latest Oxygen OS 10.5.8 for the OnePlus 8 Pro, while the regular 8 is receiving new Oxygen OS 10.5.6 in EU and 10.5.7 for IN and International variants. However, the update was delayed in North America due to carrier restrictions, more specifically in the United States. Latest OxygenOS 10.5.8 OTA features possible HotFix for display problems. This includes the notorious green tint and black crush screen problems found specifically in the OnePlus 8 Pro. So if your display looks funny, it is highly recommended you update to the latest update. So download and install latest Oxygen OS 10.5.8 HotFix OTA for the OnePlus 8 and 8 Pro in North America.

OnePlus 8 and 8 Pro launched just last month with some top notch hardware and software specifications. However, their reputation is at stake due to the ever lasting display problems. While some say it could be a hardware problem, the manufacturer is determined it can be solved with software updates. According to some users who have updated to the latest firmware did find the green tint and black crush fixed at low brightness; like below 5% brightness. The following video explains it from MoDDing Guy. 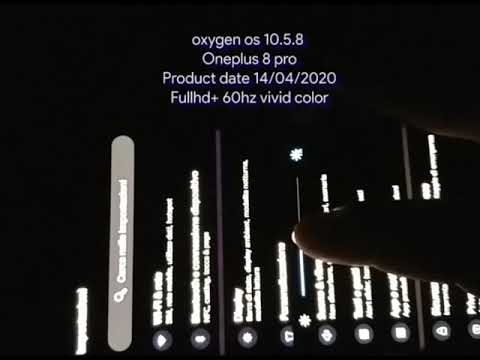 Moreover, a user who updated to the previous Oxygen OS 10.5.6 update did find a possible green tint fix; but only partial. After the update, when you switch DC dimming ON, the green tint doesn’t show up. Whereas, with DC dimming OFF, it still shows some green tint; but much better than before. As for the black bar and black crush, it may come later. You can checkout the source and screenshots here.

The latest OOS 10.5.8 also features April 2020 security patch and possible fix for numerous display issues. According to the changelog, you will now experience better video quality at low brightness. This could be a potential black crush fix; according to 9to5Google. Apart from the display fix, the OTA features power consumption improvements, overall network connectivity and stability for communications boost including 5G, Bluetooth, and WiFi. The manufacturer also improved performance and stability of Wi-Fi transfer speeds and optimized network latency for online games for smoothness. The camera also update with optimized HDR effects.

There are different build numbers for different variants of the OnePlus 8 and 8 Pro; with the same changelog. This includes OxygenOS 10.5.6 for the OnePlus 8 in EU, OOS 10.5.7 for 8 in India or International variant, and finally a universal Oxygen OS 10.5.8 build for OnePlus 8 Pro in EU/IN/Int.

The Oxygen OS 10.5.8 is currently rolling out in the United States and also in some European countries. As for the EU, the build number may differ from the original available in the USA. Here is an update log from the 8 Pro variant IN11AA. The incremental OTA comes in a large package of 155 MB in size.

You can download the OTA updates, by simply going to Settings app > System Updates > Check for OTA updates. It will automatically download and install the updates, if available.

If you don’t see any update there, you can check the software version of your OnePlus devices in Settings > About Phone and if we have the latest version available below, then download the full stock firmware zip or full ROM zip and install it via Local Upgrade method.

Before you download, checkout the various OnePlus 8 Pro variants

Here is a list of different OnePlus 8 Pro model numbers. Use this to download the firmware packages.

Before you download, checkout the various OnePlus 8 Pro variants

Local Upgrade: This requires the full stock firmware update zips. It is the easiest way to update any OnePlus device. You can switch between Open Beta firmware or Stable channel easily. Don’t worry, you won’t lose any data. However, backup is very important. Installation instruction here: OnePlus rolls out Oxygen OS 10.5.4 and 10.5.5 for OnePlus 8 and 8 Pro.