Stable Android 10 is already rolling out for the Galaxy S10 and Note 10 for both the Exynos (global) variants as well as the Snapdragon variants in the United States. The update is rolling out in phased manner and soon all the Note 10 and S10 devices will be updated to One UI 2.0 firmware. Alternatively, if you don’t want to wait, you can always download the full stock firmware via SamFirm downloader and manually update using the Odin flash tool. However, the Galaxy S9 and Note 9 series’ Android 10 beta program needs more optimization. So the Note 9 is now reviving yet another OTA update with many bug fixes.

The One UI 2.0 beta 3 update for the Exynos variants of Note 9 features a new firmware build number N960FXXU4ZSL7. This comes after the beta 2 with build ZSKH. According to the update log listed below, the new beta 3 OTA update features security patch level from December 1, 2019. Force close while using Samsung Pass has been fixed. Fix for the SPen Aircommand translation not working. Bug fix for Iris recognition while using Secure Folder. Force close occurs while editing LED icon and finally stability for Mobile Hotspot connection. 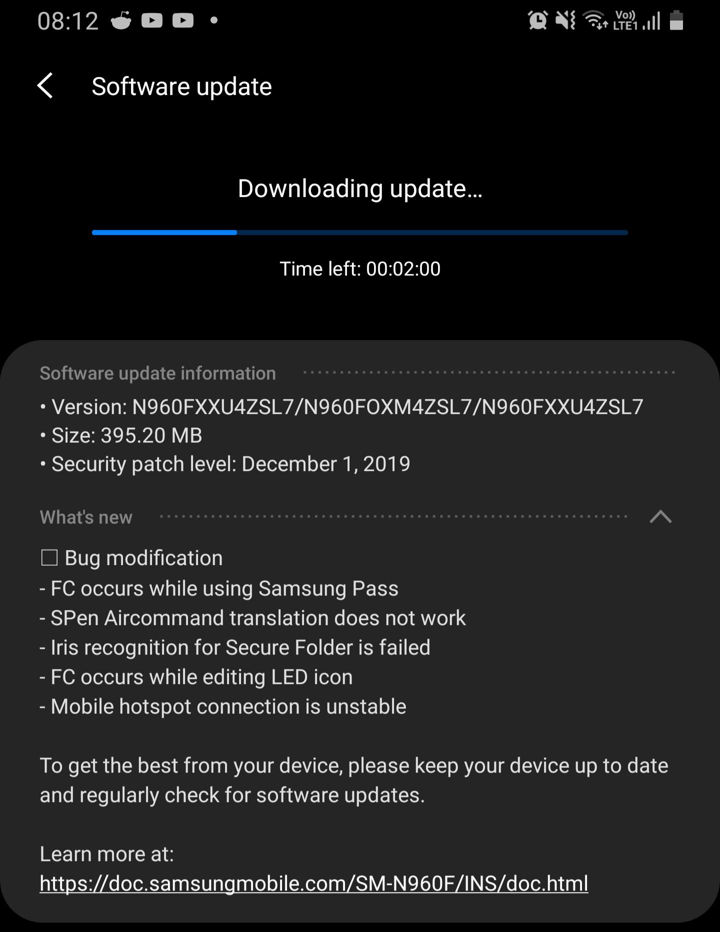 Following we have listed the official Android 10 OTA update.zip file  from beta 3 for the Exynos Note 9 variants. The OTA is available for all the Exynos variants for the regions where the beta is live. Alternatively, you can also manually update your Note 9 series phones to the latest beta 3 using the OTA update zip files listed below.

You may want to install beta 2 beforehand:

Note: The beta 3 ZSKH to ZSL7 OTA download link will be updated soon. If you have a Note 9 on beta 2, then you can capture the OTA using this tutorial and the proxy app called ccproxy post the OTA update link in the comments below.

How to update Samsung Galaxy Note 9 to Android 10 beta 3?

The easiest way to update Galaxy Note 9 to Android 10 i using the Samsung Members app. However, for the regions where the update is not yet available, download the OTA update zip from above and installation via stock recovery or ADB sideload method.

Checkout our popular tutorial about S10 for two more methods of installation if the following does not work – Download Android 10 beta for Exynos Galaxy S10 based on One UI 2.0.

Step 1: Make sure your Galaxy Note 9 is on the Android 10 beta 3 firmware ZSL7 build.

Step 2: Download ZSKH to ZSL7 OTA update zip from above. Rename it to update.zip and transfer the file to your phone’s storage or SD card.

Step 5: Navigate to the update zip file (ZSKH to ZSL7) in SD card and hit power button to select it.

You may also need to know how to restore Samsung Galaxy devices back to stock Android 9 Pie. Thanks to u/Stranger_On_Reddit for the image and Murtaza Saeed for the OTA capture tutorial.