Google Play Store has been around since the beginning of Google acquiring Android as an operating system for mobile phones. There have been many updates to the Play Store since. One of the important feature introduced with Android Oreo is the Play Protect. The fundamental job of Play Protect is to block or warn the uers of malicious or harmful apps on the Android system. However, since today, a bunch of Samsung users have reported of Google Play Store flagging the official Samsung Galaxy App Store as potentially dangerous and fake at the extent of even blocking it.

Now, one of the key features of Google Play Protect is to keep the harmful or fake apps away from This also includes a competitive App store providing alternative download links. This is the reason why the official Galaxy App Store, Amazon app store, Aptoide, F-Droid, or YALP Store are not on the Google Play Store. The main reason is Play Store cannot guarantee of the apps found in the alternative app stores as safe to install.

However, recently, the official Galaxy App Store from Samsung is being blocked by Play Protect for some users and the warning is persistent. The warning states that the app is fake and may damage the device. Mostly, Samsung Galaxy S7 and S7 Edge users who have recently upgraded to official Android 8.0 Oreo update are seeing this problem. See the possible fix below. 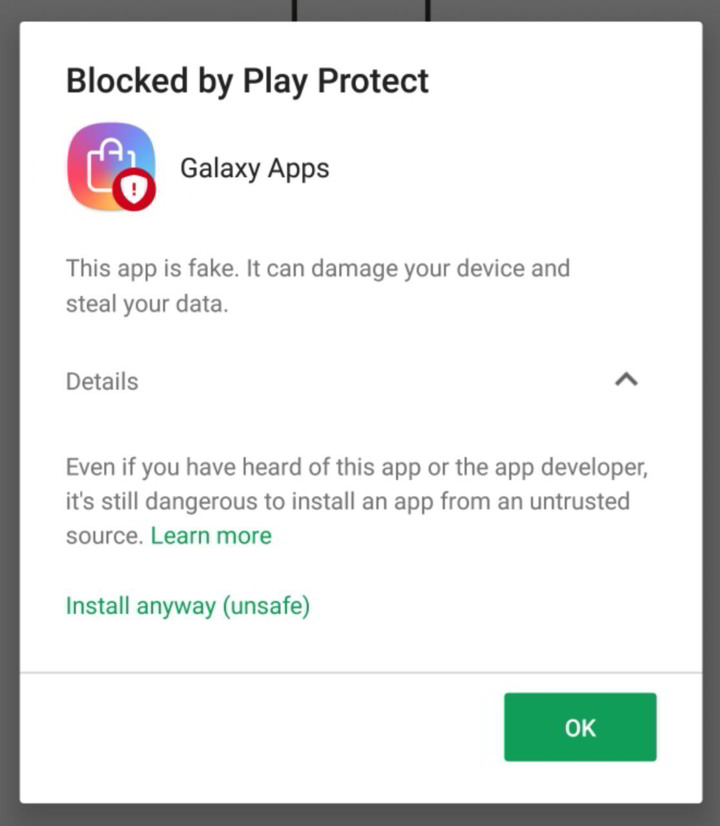 Before you proceed, make sure you are running the latest apps stores from Google and Samsung. Go to Settings and tap on the Play Store version to install the latest version. Launch the Galaxy App Store and go to my apps and update the app store. Now, do the following:

This is a temporary fix. If you want to keep the ‘harmful app detection option’ active, you may have to wait for Google to update a patch.

You may also like Good Lock 2018 for all Samsung devices.