Samsung started the month by rolling monthly security updates for its devices and now towards the end is busy dropping Android OS updates for its older devices. Probably with the release of the phenomenal Android 8.0 Oreo lead Samsung to update its mid ranged flagships to Nougat 7.0. With that said, Samsung rolled out the official Android Nougat 7.0 update for Galaxy J7. This update is rolled out of Russia as of now as OTA update.And in a matter of days or latest by a week the update will be rolling on everyone’s device around the globe.

The Nougat 7.0 update will take the Samsung Galaxy J7 to the firmware build number  J710FXXU3BQHA. This Nougat 7.0 update for Galaxy J7 is based on the latest August 2017 security patch update. It weighs around 970 MB. Also, the Android 7.0  Nougat packs together various amazing features such as Merged notifications, battery saving tools, in addition to a number of regular bug fixes, stability improvements, speed optimizations, Google Doze, DND etc.The update is rolling out as OTA. So not every device will receive the update at a time. But You can manually download and install the Nougat 7.0 firmware directly from Samsung servers too. 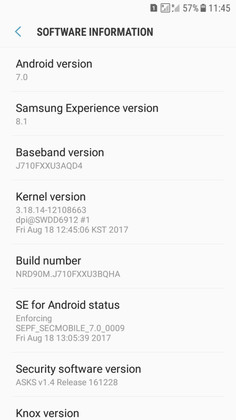 For a faster speed and absolutely free download, You can download SamFirm tool listed here. It will download Galaxy J7 full stock firmware update directly from Samsung servers. You can use it to restore the device to complete stock.

How to Install Nougat 7.0 Update for Galaxy J7?

Well, there can be two ways through which You can install the latest Nougat 7.0 Update for Galaxy J7. You can capture the OTA update and install the update as it becomes available for your device. Or the second way is to Download the firmware directly from Samsung servers and restore the device to stock firmware using latest Odin Tool.

How To capture OTA Update?

Get the Nougat 7.0 for Galaxy J7 via over the air:

And let us take a look at the second way to install the Nougat 7.0 update.

The installation procedure is pretty simple. Here is a short guide to update. For a detailed tutorial, head over to this tutorial.