The Axon 7 is the latest flagship device for the ZTE which was released recently. Previously, we have seen ZTE roll out Android 7.0 update to the flagship Axon 7, which was last month. Now, ZTE is again rolling out Android 7.1.1 Nougat OTA(Over-The-Air) firmware update to Axon 7. This brings the newer firmware build number A2017UV1.1.0B19 which has been updated from the previous build A2017UV.1.1.0B15 to the device. Moreover, the update brings latest March 1 security patch level from the AOSP out of the box. This also adds a bunch of features like- Daydream, T-Mobile Wi-Fi calling support, bug fixes and miscellaneous performance improvements. The full changelog and features are given below. You can check out the screenshot, it clearly shows the build number and latest security patch information. 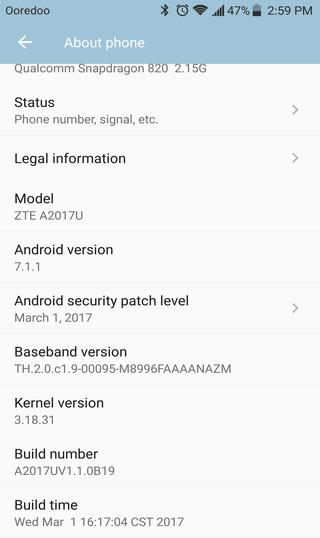 Meanwhile, there are only a few devices running on the Android nougat 7.1.1, namely- the nexus and pixel devices, the major rival OnePlus, which has recently pushed Android 7.1.1 update to its flagship duo OnePlus 3 and 3T. Now that ZTE Axon 7 is added to the 7.1.1 nougat device list, it makes us legit to comment, the ZTE not only has a stunning hardware but also a quicker software support. The OTA weighs around 438.62MB and we highly recommended you to use a Wi-Fi connection to download the 7.1.1 update. 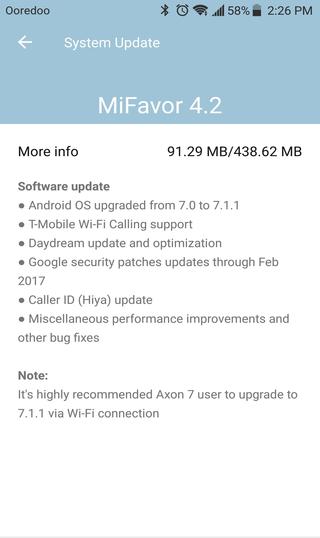 As the firmware update is rolled out through OTA(Over-TheAir), you can capture it on your device via the settings>about phone> software updates section. If your device doesn’t show it up at the moment, we advise you to be patient as the OTA normally takes some time to reach your phone. Moreover, it is very important for you to be on the build A2017UV1.1.0B15 to receive the OTA update.

A manual restart is required after upgrading. Alternatively, in case your Axon 7 device is rooted with TWRP installed or the device is bricked for some reason, you can restore/unbrick the device using the full stock B15 SD  Card package.

Install the package to B15 and later, receive OTA updates in order to upgrade to Android 7.1.1 Nougat. If you face any issue while installing the same, let us know via the comments section below.