The AT&T support page has not yet updated us with the new features, fixes that come with this PG3. Users have reported this firmware to be rolling out across the United States. However, S5 users who have unlocked their phones or users outside the US may not receive this update over the air. For that, you will need to flash the update manually. Fortunately, we have listed the latest firmware for the same in order to update in no time. Here we have listed a full firmware file of flashable through Odin s/w as well as OTA update package flashable via stock recovery.  So no matter which firmware you run, be it Android 5.1 Lollipop or otherwise, you can still take your precious S5 to the latest on. 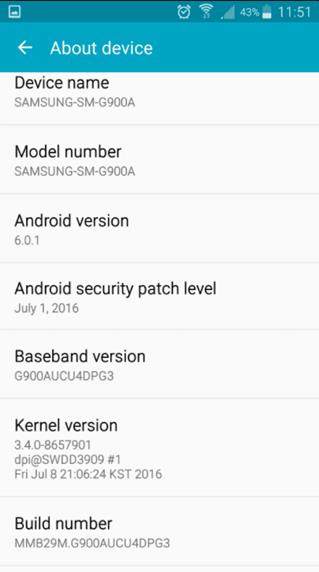 the files are not yet available. We will be updateing it here soon.

The files listed above are OTA updates. Hence, you need to flash them either via stock recovery by choosing apply updates from SD Card or via ADB sideload  method. You will need to update your firmware gradually. Meaning, first check the firmware build number of your device and then flash the proper OTA file. Go from v1>v2>v3>v4.

Note: This is a manual update method. Hence, you should be cautious about it. This procedure may wipe your data and apps. So make sure you backup everything on your PC like Contacts, Messages, Applications, pictures, and videos. Go through the prerequisites and then proceed with the instructions from below. Reader’s discretion is advised.

1. Verify your device for compatibility. The Marshmallow ROM is compatible with the listed AT&T S5 only.

2. Make sure you have latest device drivers setup on your PC for a better connection. Get it from the official page of your device manufacturer.

3. Make sure your device is on at least PA2 official Android 5.1.1 Lollipop firmware. Otherwise, download the PA2 Odin firmware and flash via this tutorial.

Step 1: Download the firmware or OTA file for your Android device. You don’t need to extract the file, just place the file in the phone storage like SD Card where you can easily locate it.

Step 2: Add or replace .zip extension to the file you downloaded on your phone. For instance, if PF3 to PF8 is .bin then change it to .zip). You may need a separate application to do so on your Samsung device. Better rename it on your PC and then transfer the file.

Step 3: Move it to an SD card with at least 2GB free space.

Step 4: Reboot into recovery. Turn off the phone and wait a minute for it to completely turn off. Hold Volume Up + Home + Power until you see a little Android guy.

Step 5: Once into recovery, Select Apply Update from External Storage.

That’s it wait for the operation to complete. Alternatively, if the above procedure fails, you can also manually flash it via ADB sideload. Check out the full tutorial from here.