Samsung is working on it upcoming firmware update based on Android 10 called One UI 2.0. One UI became very popular when the manufacturer announced it with Android 9 Pie. One UI 1.0/1.1 is now running on latest flagship phones from past three generation in including the Galaxy S10, Note 10, S9, Note 9, Galaxy S8, and Note 8; among other newly launched A-series and M-Series phones. The South Korean electronics giant is ready to announce the upcoming One UI 2.0 firmware update based on Android 10. Here is the list of Samsung devices that will receive Samsung’s Android 10 update based on One UI 2.0.

T-Mobile’s official listing for the Samsung Galaxy S10 Series and  Note 10 Series update to Android 10 proves that Samsung is already working on OneUI 2.0. This means that Samsung’s beta program will start soon for Galaxy S10 and Note 10 series phones. The first beta testing firmware based on Android 10 will roll out for Snapdragon S10 and Note 10 phones; most likely from T-Mobile. So stay tuned because we will list the firmware download links as soon as they are available.

A video published by Brazilian technology channel Dudu Rocha on YouTube shows the One UI 2.0’s user interface and most of the upcoming features in Android 10. We already know that Android 10 features Live Caption, Smart Reply, Sound Amplifier, Gesture Navigation, Dark theme, Privacy Controls, Location Controls, Security Updates, Focus mode, Family Link, and more. One UI 2.0 includes all of this and more. For instance, the new gesture navigation you will notice on the new One UI firmware. Here is the video you must watch for all the features of One UI. 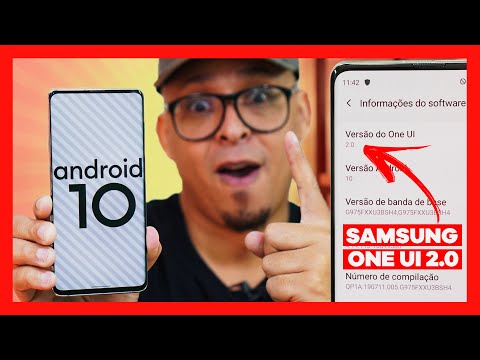 New One UI 2.0 navigation gestures – swipe up from the bottom of the screen to go to home screen, swipe from the left or right side of the display to go back, and swipe up from the bottom and hold gets you the multitasking menu. From the video, we can see new features like built-in screen recorder, Link to Windows shortcut in the quick toggles for launching Microsoft’s Your Phone app. You will find new Media and Devices buttons in the notification to quickly access all connected devices like TV, Bluetooth devices, IoT home appliances, and more. Most importantly, native support for Samsung’s DeX PC app will be available right away.

With One UI 2.1 for the Samsung Galaxy S11 and S11 Plus, we can expect smoother animations, new and revamped user interface, optimizations to the system, and performance improvements to the battery life. Most importantly, it brings native Dark Mode. While this feature is already listed in Android 9 Pie based on One UI 1, this is still a bonus.

Following is the list of Samsung devices like smartphones and tablets to receive the latest Android 10 update based One UI 2.0 firmware. As the official Android 10 update sources are available from Google to the public, manufacturers have already started testing the new OS for their flagship phones. Soon Samsung will release the first OneUI 2.0 beta build for the Galaxy S10 and Note 10 devices across the globe. So stay tuned!
Here is the list of Samsung devices receiving One UI 2.0 stable OTA update in the future:

There is no mention of the Galaxy S8, S8 Plus, or even the Note 8. As the devices are over 2 years of support period, it is very unlikely the S8 and Note 8 will receive One UI 2.0 OTA update. The OneUI 2.0 update will be listed here as soon as the ROMS are available for download.