Allo and Duo are the two newly introduced smart messaging and video calling apps from the tech giant Google. These new apps were introduced recently and have already made its way to the Google Play Store. Allo is basically a messaging app just like the Hangouts, except, the Allo app comes with smart functionalities and is way more superior than the former. Google has made the Allo messaging app more automated. Allo provides smart suggestions according to your usage with its built-in Smart Reply feature. Dou, on the other hand, is a video chat application and is based on the user’s phonebook just like the Allo. That way, it becomes seamless to video call anyone. Google has optimized Duo to work well with a slower internet connection or spotty network as well. Hence, if bandwidth is limited it adjusts quality and holds the connection. The calls are transitioned between cellular and Wi-Fi and comes with privacy and security features including the end-to-end encryption. UPDATE: The official Google Allo and Google Duo are now available for download on the Play Store and here as well.

The apps have been leaked and we have the latest APK for you to download. Unfortunately, these Apps are inoperable at the moment and require authentication from Google. The apps are meant for verified beta testers and developers only. Hence, even though you may grab the APKs of Allo and Duo from the app market, it shows a text authentication screen as the servers aren’t live and won’t send you any verification codes. However, defying all odds, an Github member, Quinny899,  has been able to decompile the app and remove the “Welcome” activity at launch. Moreover, using an Xposed module AlloAllo for Android, you will be able to bypass this authentication screen and enter the app thus making it operable. But not completely. This works with arm64 devices only. See: How to check out if the device is arm, arm64, or x86.

The app was not found in the store. 🙁
Go to store Google websearch

These are old files, check out the above section.

How to run Allo on your Android device and Bypass Allo Authentication Screen?

Take a look at the Allo App User Interface: 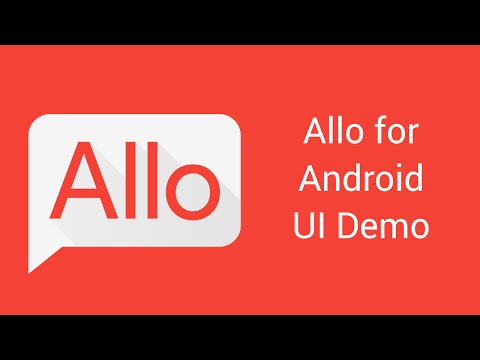