The Chinese manufacturer Huawei has deployed the EMUI 4.0 firmware update to yet another device. Ths time it is the Honor 6 H60-L04 that is being updated to stable Android 6.0 Marshmallow update. The update has already reached many European regions like France, Netherlands etc. and now the some parts of Asia have seen the update. The full firmware file for the Honor 6 is now available for Asia-Pacific region with build number H60-L04C636B811. This is a stable ROM and hence, can be expected without bugs. The update is rolling out in waves and soon hit devices in Thailand, India, Indonesia, Korea, Bangladesh and more. Here are the firmware details: Device: Huawei Honor 6, Model: H60-L04, Android version: 6.0 Marshmallow, EMUI: 4.0, Firmware: B811, Build Number: H60-L04C636B811, Release Date: 5.05.2016, Status: Official (Stable), Type: Full firmware image, Region: Asia Pacific, Country: Thailand, File Name: Honor 6_Firmware_H60-L04_Andriod 6.0_EMUI 4.0_C636B811_Southern-East Asia_Channel-Others.zip 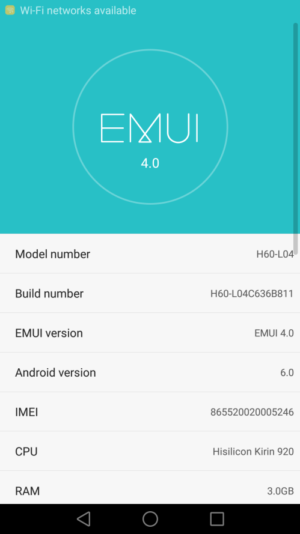 Stay tuned and we will update the full firmware files as soon as they are available.

Warning: Although these are official updates and may not affect your device, you should still be cautious about it. A full backup is highly recommended and verify your device. Go through all the requirements carefully. Reader’s discretion is advised.

How to Install Official Marshmallow On Honor 6 H60-L04 With B811 Android 6.0 Firmware

This includes the usual  method using the Updater app or installing with the dialer for advanced options. In each case, you need the firmware file in the internal storage. Then copy the dload folder from the firmware to device’s internal storage and upgrade through the built-in updater application. For a detailed tutorial, it is recommended you go through this page for the Honor 6: Install Official Honor 6 Android 6.0 Marshmallow B820 Update.